American Tyson Alexander secured a two stroke victory over Sweden’s Pontus Nyholm and South Korea’s Byeong Hun An finishing at 22-under-par to take out the Veritex Bank Championship in Dallas on the Korn Ferry Tour.

Alexander became the first player in Korn Ferry Tour history to successfully defend a title, and worked hard on Sunday to close with a 6-under-par 65 rallying over the closing nine with a string of pars and two birdies to set up the victory. 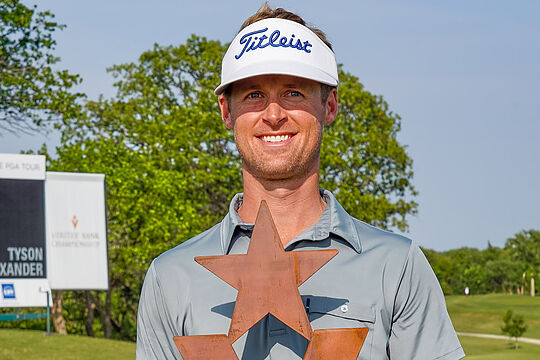 “Whenever you can be the first person to do something, I think that’s cool,” said Alexander. “Back in college, I won the Azalea Invitational two years in a row (2009 and 2010), so I kind of kept thinking about that. I’ve played good golf on this course before, won back-to-back tournaments before. I just kept saying that I’d done this before.”

The 33-year-old former University of Florida player earned US$135,000 for his second Korn Ferry tour victory. Last year, he closed with a 64 to take the inaugural event at 23-under-par meaning in eight career rounds at Texas Rangers Golf Club he has a combined total of 45-under-par.

Sunday’s win moves Alexander from No. 73 to No. 8 on the points list, and within 300 points of the 900-point mark the Korn Ferry Tour is currently using as its fail-safe threshold for players to finish among the Top-25 and earn a PGA Tour card at regular season’s end.

Alexander comes from a strong golf family background. His father, Buddy, won the 1986 US Amateur Championship and coached University of Florida to two NCAA titles. His grandfather, Skip Alexander, won three times on the PGA Tour.

Brett Drewitt finished the best of the Australians in a share of 12th position, a closing 65 moving him twelve places. Ryan Ruffels also featured on the final day carding an impressive 62 to move thirty-three places to a share of 18th position.

Curtis Luck and Aaron Baddeley finished in a share of 46th position, with Harrison Endycott missing the weekend along with Steven Bowditch and Rhein Gibson.

The 2022 Korn Ferry Tour season continues April 28 with the first round of the Huntsville Championship at The Ledges in Huntsville, Alabama.