All eyes on Scott to claim third Masters title

Adam Scott will pursue more history this week in Melbourne, as the world number two aims to become the first player ever to win the Australian Masters three years in a row.

Scott is the only player in the world’s top-80 competing at the Metropolitan Golf Club with the next best ranked player, Geoff Ogilvy. 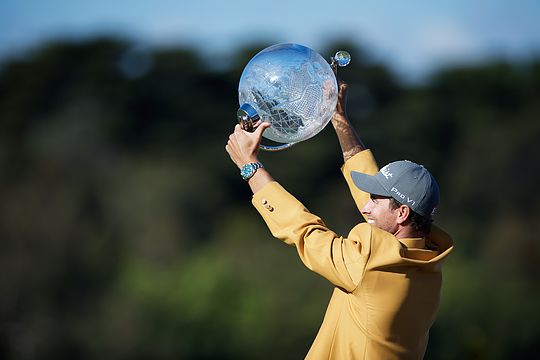 Scott won two out of three tournaments last year on the Australasian Tour ‘Summer of Golf’ and was only pipped on the last hole at the Australian Open by Rory McIlroy.

Had he claimed the Australian championship, Scott would have joined Robert Allenby in winning the so-called triple crown of Australian golf. In 2014, Scott will certainly be gunning for one better.

Ogilvy has never won an Australian Masters title and the thought of beating Scott to do it must seem like an achievement even a former Major winner would deem special.

But Ogilvy, ranked 83rd in the world, missed the cut in the Perth International last month, his most recent start and the wobbles of 2013 and most of 2014 appear to still be lurking.

Ogilvy did win the 2014 Barracuda Championship, a tournament that uses the modified Stableford scoring system, with a score of 49 points.

It was his first victory in over four years, yet this season his performances in the majors has been disappointing with a tie for 46th at the PGA Championship his best.

Yet Ogilvy is a fighter and with over US$28 million in career earnings, he knows how to win, you don’t win a major and three World Golf Championships unless you do.

This year marks the 36th staging of the Australian Masters and the first time it has been played at The Metropolitan Golf Club.

First held in 1979 at Huntingdale Golf Club , the annual presentation of the gold jacket to the champion has become a notable tradition in Australian golf come each Sunday at the event.

Greg Norman became synonymous with the tournament in the earlier years amassing six gold jackets from 1981 to 1990.

This event has also given several Australian players the chance to launch themselves onto the international stage after breakthrough victories.

They include the likes of Ian Baker-Finch, Craig Parry, Richard Green, Peter Lonard and Aaron Baddeley.

That’s the beauty of this tournament – it produces great champions.

The likes of young guns Jake Higgingbottom, a former winner on the Australasian Tour, Ryan Ruffles, Oliver Goss and the Asian-Pacific Amateur Champion Anthony Murdaca, adds spice to the field.

Experience in bigger events count and all would love nothing better than securing a home win but Scott will be hard to beat.

Yes there is some international spice added with Americans Zac Blair, Kyle Stanley and Boo Weekley making an attendance but this tournament is really an Australasian affair – after all it is the ‘Australian’ Masters.