All-time Major record falls to In Gee Chun at Evian

Inclement wet weather might have plagued the final women’s major of the year but the conditions on the shores of Lake Geneva did little to stop the In Gee Chun juggernaut at the Evian Championship in France.

The softer conditions assisted the South Korean to post a major championship record – male or female – with her 21-under-par 263 total bettering the all-time scoring record of 20-under-par set by Jason Day at the 2015 PGA Championship at Whistling Straits, which was matched by Henrik Stenson in The Open Championship at Royal Troon this year. 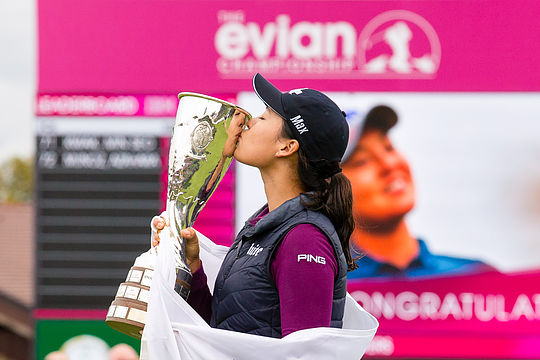 And after blitzing the course all week, Chun had to do it the hard way after missing the fairway on the final hole and being forced to lay up from thick rough.

Faced with a shot from just under 100 yards from the green, Chun pitched to 10 feet and drained the putt, like she had done on so many occasions this week, for the record and the victory.

“I just cannot believe I won the Evian Championship. I made 21-under-par. I’m not dreaming, right?” the 22-year old gushed.

“I was so nervous after the third shot. My caddie told me, ‘In Gee, try and enjoy your walking’, and then he said, ‘You can try to make a par. If you make the par, I buy the dinner.’”

China’s Olympic bronze medallist Shanshan Feng finished in fourth place at 15-under with another South Korean ,Sei Young Kim, in fifth at 14-under par.

Although she failed to feature at the Evian, defending champion and world number one Lydia Ko took some consolation from the week by winning the Rolex Annika Major Award for being the most consistent player across the five women’s majors in 2016.

The Australian challenge was headed by Sarah Jane Smith who finished off a solid Major week with a tie for 30th place at 1-under, well ahead of Su Oh (T61) and Minjee Lee (T67).

The LPGA Tour will now take a week’s break after a torrid schedule over the past few months, before heading to China to begin a stretch of six tournaments across Asia.

The Ladies European Tour moves on to Spain for the staging of the Costa Del Sol Open in Andalucia, starting on Thursday.