Beth Allen made it back-to-back victories on the Ladies European Tour after flying home with a final round eight-under 64 to win the inaugural Fatima Bint Mubarak Ladies Open in Abu Dhabi.

The 34-year old American scorched the beachfront Saadiyat Beach Golf Club over the four rounds to complete the 72 holes at 21-under par, three strokes clear of overnight leader Georgia Hall of England. 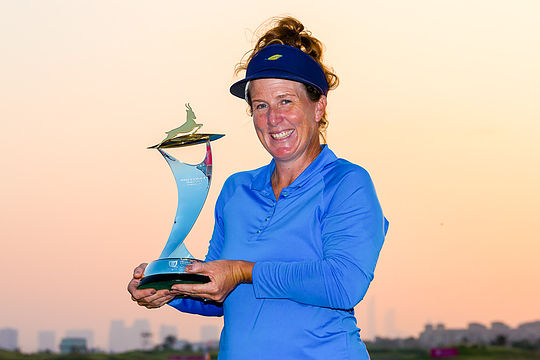 Fellow Englishwoman Melissa Reid shot 68 to tie for third place with NSW’s Sarah Kemp (69) at 17-under par, while 18-year-old rookie American Angel Yin tied for fifth alongside Sweden’s Jessica Karlsson and Scotland’s Vikki Laing at 13-under.

“This is really special. It’s so amazing to win an event that’s taking place for the first time, especially in a place like this that is supporting women in sports. I’m just really happy that I got it done,” said Allen.

“Obviously I’ve been playing really well and when I got done yesterday I felt really good and I knew I could do it, so I just tried to make as many birdies as I could today and turns out, I made nine. I’m so pleased.”

Allen now has two wins and five further top 10 finishes from 14 starts on the LET in 2016 and has leapt to the top of the Order of Merit, ahead of China’s Shanshan Feng, with three tournaments remaining.

“I really want to win the Order of Merit and I certainly think today helped. I love this course. I immediately thought, ‘wow’, I think I can shoot some low numbers around here.”

Kemp enjoyed her best result on the LET this season and led home the Australian challenge, with Rebecca Artis (T39) the only other Aussie to make the weekend action.

The LET now moves to India for the playing of the Womens’ Indian Open at another Gary Player-designed course, the challenging ‘Black Knight’ Course at DLF Golf and Country Club in Gurgaon.