Allen wins second title of the year at French Open

Allen’s consistency all season paid off handsomely as the 34-year-old San Diego native fired rounds of 64, 67, 68 and 67 for a 14-under total, earning her second Ladies European Tour title following the 2015 Ladies European Masters. 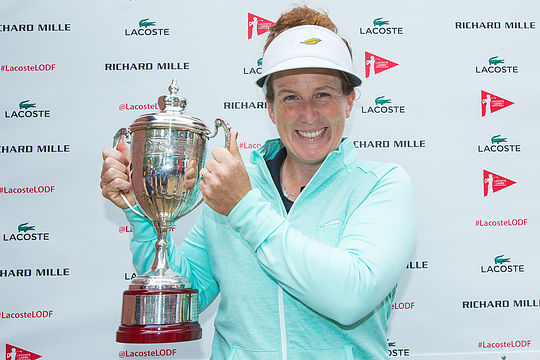 Allen caught fire on the back nine with two birdies and an eagle to finish four clear of England’s Florentyna Parker and overnight leader Diana Luna of Italy.

“It feels so great. The first time I won it was from quite far back so I had to wait, but it was really great to win in the last group.” said Allen, who is a regular visitor to Australia and a winner of numerous ALPG events.

“I knew I needed to stay patient. I wasn’t happy with my first nine but I knew that if I could stay patient around that area I could have a chance. In the end, I did.”

Georgia Hall finished alone in fourth place on eight-under-par after a final round of 64 and fellow Brits Melissa Reid, Sally Watson and Amy Boulden shared fifth place alongside Malene Jorgensen from Denmark.

WA’s Whitney Hillier was the only Australian player to make the cut, finishing in a creditable tie for 14th place at 2-under par after a final round 67.

Allen’s victory narrowed the gap between her and Order of Merit leader Shanshan Feng, however the American’s bid to overhaul Feng will be on hold as she has opted not to enter this week’s Xiamen International in China.