When Ireland’s James Sugrue won the British Amateur Championship last year, he was over the moon knowing he would be heading to the British Open followed by the following year’s US Masters and Open.

And while the World No.20 amateur got to play the Open Championship and witness the historic Shane Lowry victory, he’ll now have to wait a little longer to step foot onto the hallowed grounds of Augusta National. 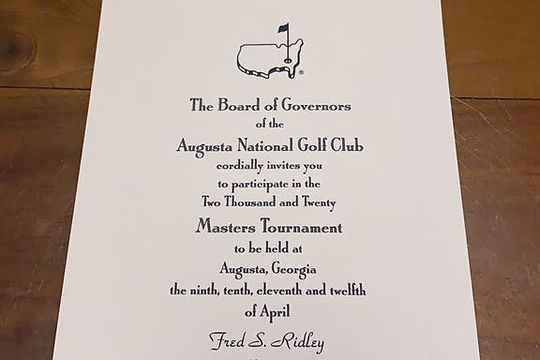 Sugrue’s current US plan’s may have been dashed, however the dream of possibly finding himself being grouped with defending champion Woods for the opening is still well alive.

“Most golfers have grown up watching the Masters from a very young age, some people I know even take the week off just to watch it,” said Sugrue in an article on EchoLive.ie

“It’s a great sporting event even for people who don’t play golf. It’s the biggest event of the year for the pro’s so it’s definitely my biggest event this year.”

Had it not been for the Coronavirus pandemic, the Masters would be just weeks away but fears of contracting the virus has placed even the most simple of outdoor activities on hold with strong suggestions it may be staged from 8th to 11th October.

That’s 200 days away but one thing we know for certain and that is Augusta National does not intend cancelling any invitation to the 2020 Masters no matter when it is held.

Sugrue was looking forward not only to the Masters but heading off the States this week for the annual Georgia Cup that was scheduled for Sunday March 29th and like the Masters, it has also been postponed.

The Georgia Cup was first played in 1998 when then reigning US Amateur champion, Matt Kuchar defeated Amateur champ, Craig Watson of Scotland.

Other winners include Sergio Garcia (1999) along with Australia’s Bryden Macpherson in 2012 while Nick Flanagan (2004) and Curtis Luck (2017) went down in the finals.

Sugrue not only has invitations to the Georgia Cup and the Masters but he’s been invited to contest the PGA Tour’s Memorial (June 4th to 7th) plus the US Open to be held a fortnight later at Winged Foot on New York’s Long Island (June 18th to 21st).

“Everything was booked, the flights and accommodation, including a lot of arrangements for my friends and family,” added Sugrue

“Naturally, I think postponement is the correct decision.”

“I have the Memorial at the start of June and that’s followed by the US Open.”

“They have mentioned May and playing then would be nice. I’d like it to be in the next month or so.”

Sugrue has also talked of turning pro after his US Open showing but that decision may also be on hold.

Of course James Sugrue isn’t alone in his disappointment, there’s the winners of the US Amateur, Asia-Pacific Amateur, Latin America Amateur, US Mid-Amateur Champion, who are also caught up in the fallout from the Coronavirus pandemic and no doubt bitterly disappointed with missing the opportunity to play at Augusta National in the coming weeks.