Victorian amateur Brett Coletta will take a four shot lead into the final round of the Isuzu Queensland Open.

Firing 3-under 67 at Brisbane Golf Club today, Coletta is aiming to become the first amateur to win the Isuzu Queensland Open since Stuart Appleby in 1991. 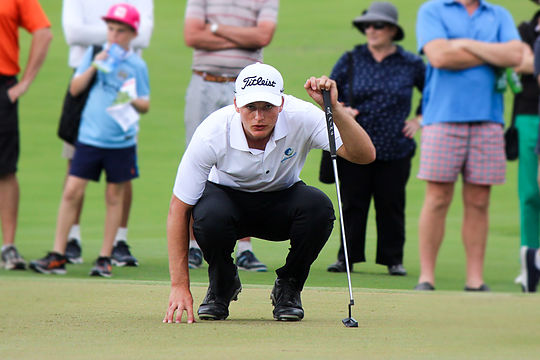 “I was very solid out there today, I felt like I had everything under control,” said Coletta.

“That birdie on the last gives me an extra shot going into tomorrow afternoon. The more shots you can have up your sleeve the better.”

Coletta is looking forward to the final round tomorrow; a win will help ease the pain of finishing runner-up at the Asia-Pacific Amateur Championship.

“A berth in the Masters, missing it still hurts. I am so proud of how I came back this week, after three rounds I am in the perfect position,” added Coletta.

“It (a win) will definitely make me feel a lot better about last week. At the end of the day it’s a Pro tournament and playing in it as an amateur, thinking about winning at the start of the week was a bit of a farfetched thought. To get here is just fantastic.”

“I have one round to go and I just need to keep my head straight and steady.”

Sitting four shots behind Coletta is rookie Professional Dale Brandt-Richards who also fired 3-under 67 in the third round.

The Isuzu Queensland Open presents a big opportunity for Brandt-Richards who is playing his 2016 season without any status on the ISPS HANDA PGA Tour of Australasia.

He earned his placed at Brisbane Golf Club this week thanks to a top-10 finish at the South Pacific Open Championship, another good result this week will see him compete at the $400,000 New South Wales Open in two weeks.

Brandt-Richards is joined on the leaderboard by Lucas Herbert who also needs a top-10 result at the Isuzu Queensland Open to get into the New South Wales Open.

On 2-under the card, South Australian Max McCardle and New Zealander Mark Brown round out the top-5 on the leaderboard.

The final round of the Isuzu Queensland Open will tee off at 9am with the final group of Coletta, Brandt-Richards and Herbert on course at Brisbane Golf Course at 10.40am.