The golden era of Australian amateur golf continues at the Isuzu Queensland Open with amateur Brett Coletta recording an impressive and emotional victory.

The 20-year-old Victorian from the Woodlands Golf Club fired rounds of 67-69-67-70 for a 7-under 273 total around a Brisbane Golf Club layout that proved to be a tough challenge this week, to take the title by three shots.

Coletta becomes the first amateur to win the Isuzu Queensland Open since a 20-year-old Victorian named Stuart Appleby won the tournament in 1991 at the same layout.

“I can’t even explain how I feel at the moment, I am lost for words,” said Coletta, “I had a couple of starts coming up anyway which was handy to know but to win this week and get a couple of years exemption, I will have a serious conversation with a few people about it.” 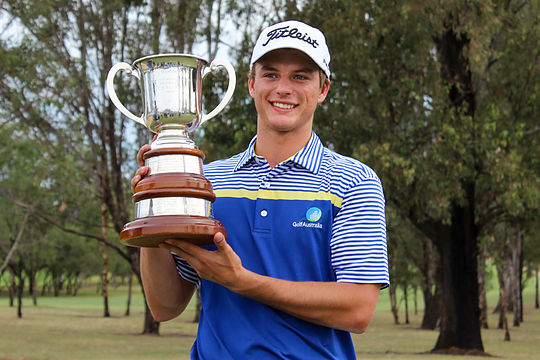 Coming into the tournament off the disappointment of finishing runner-up to fellow Aussie Curtis Luck at the Asia-Pacific Amateur Championship the previous Sunday, Coletta was very proud at the resilience he showed to bounce back this week.

“The Asian-Amateur was just a disappointment, you don’t want to ever face that again, you wouldn’t wish it upon anyone,” added Coletta.

“To come back this week, play the way I did and come out on top I am just so proud of myself, I just can’t put words to it. The way I handled myself was the biggest thing I learned today.”

For most of the day, Coletta held a five shot lead but runner-up and fellow Victorian Lucas Herbert challenged him in the middle of the back nine.

Herbert made an eagle at the 12th and had a near miss for an ace at the par-three 13th. Feeling the pressure Coletta made a double bogey at the 14th.

“I just thought eagle, eagle what is this? It was a great shot by him. We had to wait on the tee for 10 minutes and he would have had stuff running through his head just like I did. He hit a great shot and I felt the pressure,” added Coletta.

“The next hole (13) was just an error, probably the worst one I made all week and it cost me a couple of shots.”

“Coming down the stretch with people putting the pump on me, I had a good buffer at the start of the day and I just saw it slip right in front of me with four holes to go.”

With the pressure mounting and perhaps with the Gods of golf smiling down on him after what he endured last week, Coletta responded with a dramatic 30-foot uphill putt for birdie on the 17th to give him a comfortable buffer with a hole to play.

“I was staring down the barrel, I still had the lead, but it was much tighter than I would have liked. That putt on 17 was such a heartfelt putt.”

With his runner-up finish, Herbert collected the first place cheque of $16,500 as well as a start at the NSW Open in two weeks. He has also pulled inside the Top 60 on the ISPS HANDA PGA Tour of Australasia Order of Merit.

Another young player, Dale Brandt-Richards, birdied the final hole to share third with Kalem Richardson on 3-under and also earn a place in the NSW Open.