20-year-old Harrison Crowe has become just the sixth amateur in the 90-year history of the tournament to win the NSW Open at Concord Golf Club in Sydney.

Crowe shot a final round 4-under 67 to hold off a fast-finishing Blake Windred to win the storied Kel Nagle Cup by a single shot. Both players carded back-to-back rounds of 64 during the rain-shortened 54 hole event. 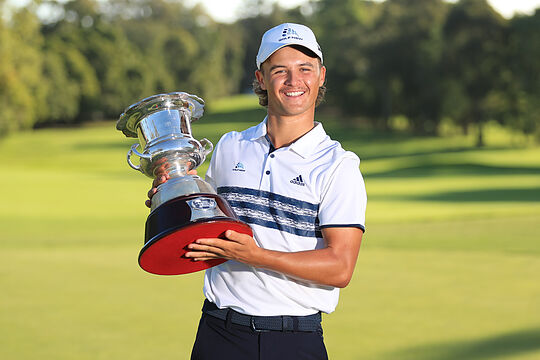 Jordan Zunic and Jarryd Felton finished in a share of third place on 16-under with Felton narrowly missing back-to-back titles after winning the TPS Sydney at Bonnie Doon in early March.

As an amateur, Crowe is forced to forgo the first prize cheque of $72,000. However, he will now have a tough decision to make regarding his playing future with the opportunity to join the Australasian PGA Tour as a full-time professional now on the table.

“It’s something to think about. I don’t want to try and dwell on it too much now. I think I’m going to enjoy my night…I’ve got an early flight tomorrow. It’s something to talk over with the parents (Tony and Shaunagh), the coaches, team, and go from there,” said Crowe, who also won the Australian Master of the Amateurs earlier this year.

The St Michael’s star becomes the first amateur to hold both the NSW Open (known as the New South Wales Close Championship at the time) and Amateur titles since Aussie great Jim Ferrier in the 1930′s. Ferrier won the NSW Close five times between 1933 to 1938 and the NSW Amateur four times.

“I can’t describe it. So good. I really actually settled down after about six. I felt all right after the first tee shot and really knuckled down. Then to turn five-under (par), but not getting up-and-down on 11 kind of creeped me a little bit, and 17 and 18 I’ve never been so nervous in my life,” said Crowe.

The Australasian PGA Tour now takes a short break before heading south for the inaugural $200,000 National PGA Classic at The National’s Gunnamatta course on the Mornington Peninsula starting April 5th.