Lucas Herbert fired a course record 7-under-par, 65, to move within two strokes of third round leader Paul Spargo and be in prime position to become the first amateur to win the Australian Masters.

Herbert is currently in a tie for 3rd at 6-under along with Nick Cullen and James Nitties, with overnight leader Michael Wright carding a 2-over-par 74 to be a stroke behind Spargo. 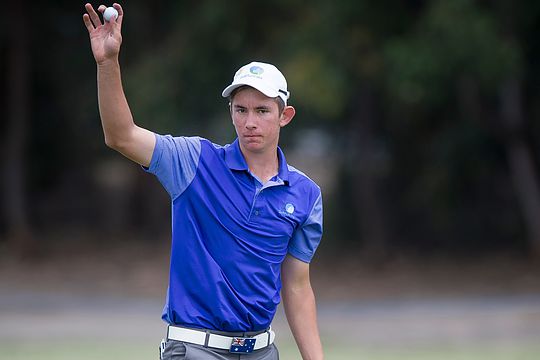 Lucas Herbert fired a course record 65 during the third round of the Australian Masters at Metropolitan Golf Club in Melbourne (Credit: Anthony Powter)

Herbert’s 65 included nine birdies and two bogeys, with the Victorian going out in 32 and coming home with a 33.

“I made use of the great golf course,” said Herbert the world number four ranked amateur.

“You really have to keep the ball in the right spot. That was something I did really well to make those birdies in the first place was to hit it into the right spots, and I was really happy with how I played the golf course today.”

No amateur has won the Australian Masters since the tournament was founded in 1979, so Herbert is seeking to create some history of his own.

Australian golfers have dominated this tournament with former world number one Greg Norman having the most success, winning the Gold Jacket on six occasions. Overseas players to have taken the title include European Ryder Cup stars, Bernhard Langer and Colin Montgomerie.

With such prestigious names associated with the event, Herbert remains relaxed, yet coy about his prospects of donning the Green Jacket.

“It’s almost expected that we are not going to do as well,” says Herbert.

“That probably suits me, but with what’s gone on the last two years with amateurs playing so well in professional events, there’s always a chance that guys are going to come out and shoot really good scores.”

Herbert is among of trio of young Victorian amateurs to impress at the Masters so far.

Ryan Ruffels, 16, matched defending champion Adam Scott’s four-under 68 in the third round, while Todd Sinnott, 22, had a third round 67.

Scott’s chances remain alive with the world number two four strokes behind the leader. Scott certainly is not out of this event with fifteen players within four strokes of Spargo.

Geoff Ogilvy lurks dangerously at 5-under following a third round 71 in difficult afternoon conditions. Ogilvy sits in a tie for 6th position with Josh Younger.