Newcastle’s Jake Higginbottom became the first amateur in 56 years to win the New Zealand Open today. It is now ten years since a Kiwi has lifted the “Bledisloe Cup” of golf.

And it is the second time this season that a teenage amateur has won an Australasian PGA event. Oliver Goss took out the West Australian Open just over a month ago. 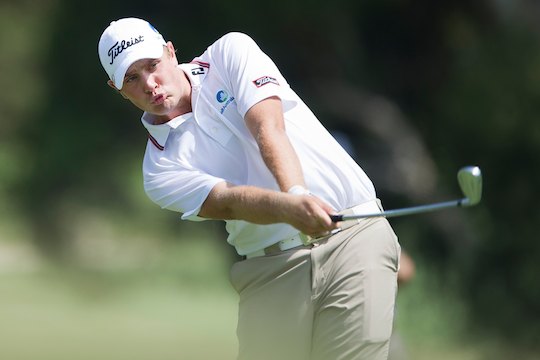 Higginbottom showed great form on the back nine with three consecutive birdies. His play into the greens regularly set him up for birdie opportunities.

Leading by one standing on the 18th tee, he ripped the driver to within a wedge of the 407m par 4. He admitted to having the most nerves over the final putt – a two-footer for par and victory.

Higginbottom was philosophic about taking the trophy but not the money.

“What about your plans to turn pro?”

“I feel that my plans remain unchanged. I’ll turn pro in about one year. This is just a stepping stone”, he said.

Uncharacteristically calm and warm, Clearwater Resort provided the perfect backdrop for a tense struggle in the final group between Mark Brown, leading Kiwi Golfer, Peter Wilson from Victoria and Higginbottom.

Brown went into the back nine with a one shot lead over Wilson and Higginbottom, but bogeys on 11 and 13 saw his hopes fade to eventually finish fourth.

Wilson was a model of patience, and joint leader with Higginbottom after a birdie at 15 to reach 6-under.

After a bogey and birdie on the final two holes, he remained at 6-under in equal second place with the fast finishing Jason Norris from Adelaide, who briefly snatched the joint lead at the 17th to reach 6-under with the low round of the day of 66.

But it was Higginbottom who took control on the 17th with his eighth birdie to return to 7-under after a bogey on 16th.

“I knew I had to make some birdies on the back nine if I was to be in a position to win,” he said.

Higginbottom admitted to being lucky with the draw after the Christchurch wind virtually blew away the second half of the draw on Thursday and Friday. But was a confident, composed and consistent performance by Higginbottom throughout the tournament.

He was near the top of the leaderboard on Friday at 2-under behind Tasmanian Craig Hancock at -4. On Saturday, he teed off in the lead group in second place after Daniel Fox from Western Australia burgled the 18th with an eagle to snatch the lead.

Higginbottom had a less than average season as an amateur in the northern summer. However since returning home he has hit some excellent form.

First he won the City of Sydney Amateur and was the leading amateur last week at the Masters at tied 10th.

Next week he tees it up at Mount Broughton in the Southern Highlands for the NSW PGA. Just a warm up event for the Australian Open where he will join other top performing amateurs Oliver Goss and Cameron Smith from Golf Australia’s National Squad to challenge the professional ranks.

As a footnote, the last amateur to win the New Zealand Open 56 years ago was the legendary Harry Berwick of St Michael’s Golf Club in Sydney.