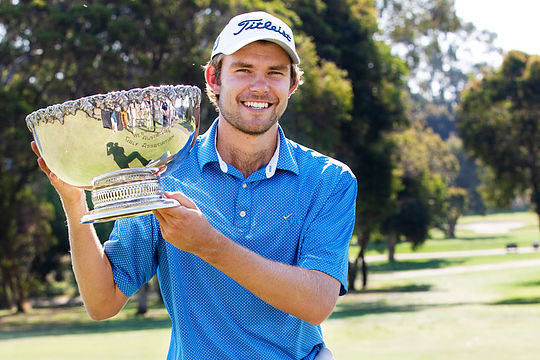 “It feels pretty special and it’s pretty cool to have dad here caddying for me,” said Murray.

“I knew dad was going to cry if I won, which he did. He works super hard to support my golf. It was so cool to have him here this week, to witness a win I haven’t had in a while, and my first win on the PGA Tour of Australasia.”

Murray becomes the third amateur in seven years to win the WA Open following Oliver Goss in 2012 and Curtis Luck four years later with both of those players going on to play in the US.

“This means a lot; it is something I have been striving towards ever since the WA Open last year,” added Murray, who finished tied 9th last year.

While Murray has earnt full status on the ISPS HANDA PGA Tour of Australasia through to the end of the 2019 season, he is unsure of when he will take the next step of his career into the pro ranks.

“I definitely had plans of turning in the near future but I have no idea what I will do,” added Murray.

“I have had a couple of mates turn pro, Brett Coletta and Ben Eccles who have won on Tour as well; from their experience, I know that it is a pretty tough decision.”

“It’s one that I will have to sit down and have a good hard think about. It’s going to be my job so I don’t want to rush into things. I just have to make the best decision I can.”

ACT’s Matt Millar carded a final round 5-under 67 to finish in outright third place and take home the winner’s prize cheque of AU$15,000.

Another three shots back on 10-under and in a five-way tie for 4th were Jordan Mullaney, Blake Proverbs, Stephen Leaney, Brett Rankin and Damien Jordan.