Amateur Zach Murray has taken the first round lead at the WA Open after equalling the course record at Mount Lawley Golf Club in Perth.

Teeing off in the morning from the 10th hole, Murray would show little of the form that would sweep him to the top of the leaderboard just hours later. 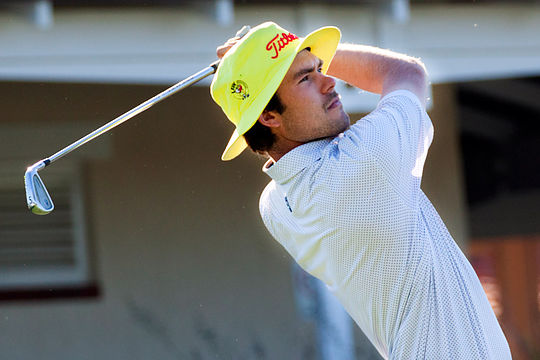 After making the turn at 2-under thanks to birdies at the 16th and 17th holes, the Victorian reeled off six birdies across the inward nine to enter the clubhouse at 8-under 64 to equal the record set by Mitchell Brown in 2003 and Tony Carolan in 2006.

“It’s nice to have a low opening round, it takes a little bit of pressure off having to try and come home late,” said Murray, who finished 9th at the WA Open in 2017.

“Last year I seemed to have one or two-under, just plot my way along and then shot low in the last round.”

“The conditions were great and the course is great so the opportunities were out there if you managed to roll a few putts in, which I did.”

Sitting one shot behind Murray is Damien Jordan, who is fresh off the back off a win at last week’s $100,000 Eynesbury Masters, where he came up against, and beat, the in-form European Tour player, Lucas Herbert.

“It was absolutely perfect out there this morning. I thought I was playing pretty good but to see someone one better is fantastic golf,” said Jordan, who won the 2017 Victorian PGA Championship and secured a top-20 finish at the co-sanctioned Fiji International in August.

“The putter has been really hot. So it was good to make the most of hitting good shots.”

Brett Rankin, defending champion Stephen Leaney and Ben Ferguson sit in a tie for third on 6-under, with Ferguson’s result all the more impressive in his professional debut.