Oliver Goss outlasted Brady Watt on the fifth play-off hole to win the 2012 Western Australian Open after the two amateurs finished with scores of 16-under at Royal Perth Golf Club.

Goss, a quarter-finalist at this year’s US Amateur, fired rounds of 72-66-68-66 and had an eagle opportunity on the 18th to claim the championship only to see his putt come up short. 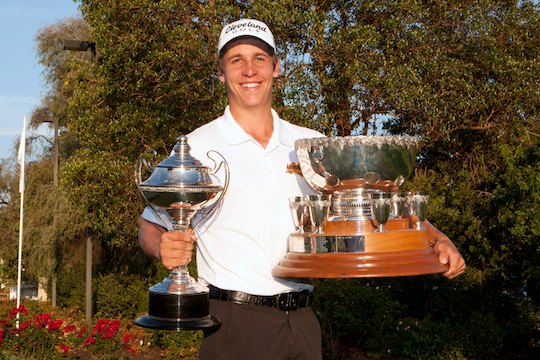 Watt, a twice National Trial winner including last week’s Keppera Bowl, fired rounds 70-68-66-68 and forced the play-off with a birdie on the last.

Goss becomes the first amateur since Stephen Leaney in 1991 to win the Western Australian Open Championship and the first since Danny Lee in 2009, to win a PGA Tour of Australasia tournament.

“It feels pretty surreal, it hasn’t really sunk in at the moment but I bet it will tomorrow morning,” said the 18-year-old Goss.

“I like to think it’s quite a good achievement and I am really happy. I guess things were just flowing and I definitely putted better today than I have any other day, I think that’s what made the difference.”

Watt was happy with his performance throughout the week, which comes off a stellar week last week in Brisbane after winning the Keperra Bowl.

“I was just happy because I won last week and put myself in position to get another W this week, I fell a little bit short but that’s golf,” said Watt.

“I have been working hard with my coach on a few things here in Perth and it is starting to all come together. This was another solid week for me and I am happy with the outcome.”

European Tour player and local, Brett Rumford, finished in 3rd position at 14-under, two behind the amateurs with a closing round of 65 to set a new course record.

Defending champion Rohan Blizard finished in a tie for 4th with Ashley Hall at 13-under.

Rumford was not alone with a final day charge also coming from Daniel Nisbet, who was competing in his first professional event in Australia. Nisbet fired a closing round of 65 to finish at 12-under and in a share of 6th position.

This summer Goss will be an incoming freshman at the University of Tennessee, playing the tough and competitive US collegiate circuit – the development ground for many Aussie professionals with Bryden Macpherson, Aron Price and Tarquin Macmanus all former collegiate players.

Securing his first professional win before heading to the US has not only raised Goss’ profile, but has confirmed his standing as one of our most promising amateur talents.

“I believe it will be some of my best years at the University of Tennessee and I know that I’ll have to work hard on my game to get the results. It is just so competitive in the US but wins like today confirm that I’m heading in the right direction.”