Amateur Travis Smyth has won the 2017 Northern Territory PGA Championship by a convincing six shots at the Palmerston Golf Course. 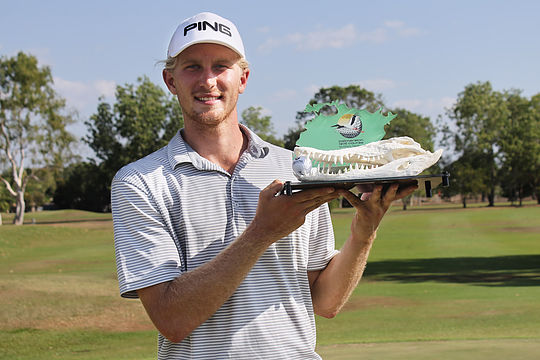 “I am very excited, the future just feels a little bit more promising now that I have my first professional win and I am still an amateur,” said Smyth.

“To be honest it hasn’t soaked in too much yet, but I am sure when I wind down later this afternoon it will definitely kick in.”

It was a wire-to-wire win for the 22-year-old, who looked in command the entire week.

“The main goal all week was just to keep it in play; it was playing really short because it was so dry so I just trusted my wedges. I have been working heavily on my short game for some time now and it definitely pulled through this week.”

“I didn’t play overly aggressive and still came out on top. It was a well thought out week and I am very happy that I got the win,” added Smyth who recorded just three bogeys all week, two of them coming at the 13th and 14th holes today.

“I made the turn and we had a live leaderboard going around with us and I saw that I had a comfortable lead so I didn’t really feel nervous.”

Making his maiden victory even more special, Smyth had his coach, PGA Professional John Serhan, caddying for him throughout the week.

“It is amazing. He (Serhan) deserves most of the credit for this. We have been working hard for the last five years,” added Smyth.

“We have been very patient, I feel like I probably should have won a little bit more in my career but it is all worth it now.”

While he can’t take home the prize money, Smyth has earned status on the ISPS HANDA PGA Tour of Australasia until the end of the 2018 season should he elect to turn pro.

However before Smyth contemplates a move to the play-for-pay ranks he will tee it up in the Asia-Pacific Amateur Championship in search of a place at the 2018 Masters Tournament.

“I have entered European Tour Q-School, I am going to go to first stage but remain amateur because in between first and second stage is the Asian Pacific Amateur.”

“If I win I will obviously stay amateur to play the Masters, but if not I’ll turn Pro and try to get my card in Europe then come back for the Aussie summer.”

“If you don’t play well at Q-School, which only comes around once a year, you are out of a job for a year. So knowing that I have status here in Australia is a massive relief. “

The big earner from the Northern Territory PGA Championship was Deyen Lawson who finished outright second, six shots back of Smyth but collects the first place prizemoney of AU$22,500.

“Trav played really well this week so all credit to him; he clearly was a deserving winner,” said Lawson.

“I am fortunate to pick up more (prize money) than him so that has worked out quite well. I’ll make sure he gets as many (drinks) as he likes. He deserves it, good on him.”

Finishing outright third on 12-under the card was Darren Beck while Damien Jordan and 2016 champion Jordan Zunic rounded out the top-5 on 11-under the card.

The ISPS HANDA PGA Tour of Australasia will now head to the Royal Perth Golf Club for the Nexus Risk TSA Group WA Open to be played from 19-22 October 2017.