Two of Australia’s top rising stars have gone head to head in The Athena at Sandy Golf Links in Melbourne with WA’s Kirsten Rudgeley coming out on top. 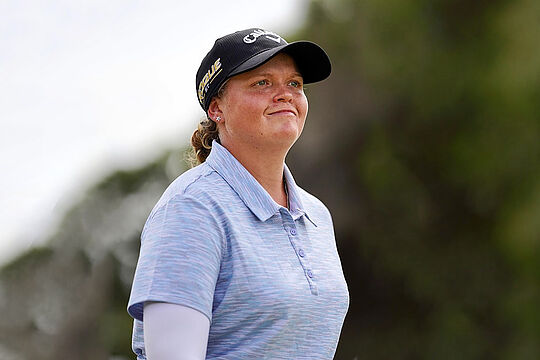 “It was such an awesome experience. I loved the whole week,” said Rudgeley, who sits at No.39 in the world amateur rankings. “I’d probably say that my short game is my strongest point and it paid off today.”

20-year-old Rudgeley came into the final day of the weekend event as the top seed after securing 73 points in a set of 10 challenges on day one putting her three points clear of Grace Kim on 70.

The Western Australian star moved into the grand final against Kim after knocking out Queensland’s Cassie Porter in the three-hole quarter finals and Stephanie Bunque in the semi final. While Kim defeated Hanee Song and newly-inducted LPGA Tour player, Karis Davidson.

With the scores all tied after the three-hole grand final, it all came down to a tense five putt putt-off to seperate the two players and Rudgeley was able to come away with the spoils.

The timing was perfect for Rudgeley’s win with new amateur rules coming into play on January 1st meaning she is able to accept the prize money which will go towards travel expenses including her upcoming trip to Augusta National for the Augusta Women’s Invitational beginning on March 30.

Next up on the WPGA calendar is the mixed-gender TPS Sydney starting on March 3rd at Bonnie Doon Golf Club in Sydney.