Japan’s Takumi Kanaya and Chinese Taipei’s Chun An Yu are the unlikely leaders following the first day’s play at the 2019 Australian Open in Sydney.

The pair of amateurs, ranked No. 1 and No. 6 in the world respectively, tore up the Australian Golf Club’s smoke-plagued layout with a pair of 6-under 65′s to lead by two shots from 2015 champion Matt Jones, Daniel Nisbet and 2018 runner-up Dimi Papadatos. 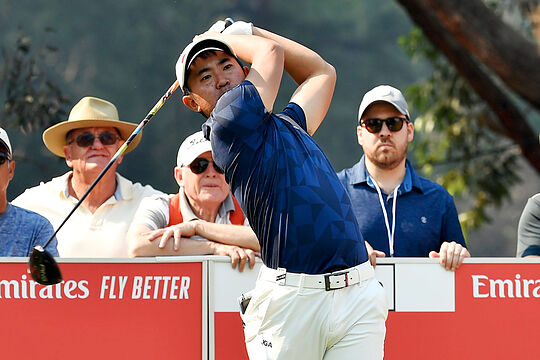 “I played the Australian Golf Club for the third time this year. I was 17 years old when I played in 2015, so I shot 85 second round, so I learned (the) Australian golf style,” said Kanaya in broken English.

“I just (knew) Japanese golf style before 17 years old. I little bit confidence, I have confidence, but I have three more days, so I will do my best tomorrow.”

While the 21-year-old is not a household name, he has plenty of form prior to his sudden rise to fame following today’s round.

He won the Japan Tour’s ¥200,000,000 Mitsui Sumitomo VISA Taiheiyo Masters just a few weeks ago as an amateur, made the cut at 58th place at the Masters earlier this year and finished top-20 at last year’s Australian Open.

Cameron Smith and Louis Oosthuizen were the next best of the big name players opening with rounds of 68 alongside Paul Casey. While the newly-slimmed down Marc Leishman closed with a 69 to sit one shot in front of Sergio Garcia on 70.

2009 champion Adam Scott had a day he would rather forget finishing with a 4-over 75.

“I just was out of sorts out there. I lost my rhythm after the first hole. I thought I had two nice shots there and missed and then I really struggled on the front nine,” said the 39-year-old.

“I hit some really bad drives that I left and didn’t scramble. Not that I was really chipping either, I was coming in with full stuff for my thirds. I didn’t play very good.”