It’s hard not to run out of superlatives when writing about the last nine months of Steven Alker’s career.

The largely unknown Kiwi who had toiled with little success for the first three decades of his career, now owns four Champions Tour titles including his latest success at the KitchenAid Senior PGA Championship.

The 50-year-old New Zealander lit up the Jack Nicklaus-designed Harbor Shores in Michigan with a final round 8-under 63 to claim a three-shot victory over 54-hole leader Stephen Ames. Sunday’s win was Alker’s first major title and, in fact, the first time he has ever qualified for a PGA Championship at any level.

It was also Alker’s third victory in his last five starts including a narrow playoff loss at the Clubcorp Classic that would have made it four. 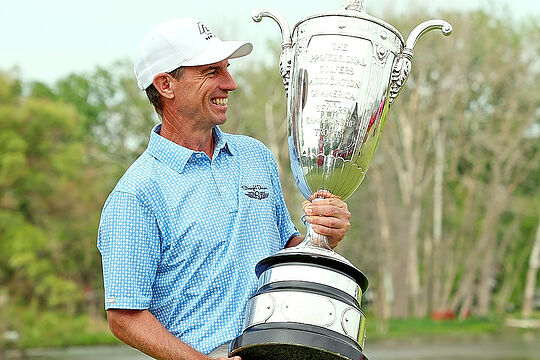 “It’s been a great ride out here and I’m enjoying myself,” said Alker. “The first couple of weeks were okay. I wouldn’t say I’m comfortable yet, but just comfortable playing with the guys out here.”

When asked by reporters where he has been the last 30 years and what has lead to his sudden red-hot form, Alker was honest about what it has taken to keep going when the results weren’t going his way.

“It’s just [been] perseverance. That’s all I can say. Just perseverance with a capital P.”

“I started in the islands and Australasian Tour and did my hard yards down there and then I decided to do go Canada and try my luck there and went to America, as well, tried some qualifiers and things like that.”

“Then got some Buy.com status and nearly got my card in 2002, I think it was Buy.com and then straight on the PGA Tour.”

“It happened really quick, those two or three years, like wham. I had some pretty good form and feeling good. And then, you know, I just didn’t get it done out there.”

Mark Hensby lead the way for the large Australian contingent in Michigan at the second senior major of the year. Hensby finished in a share of 8th place with rounds of 67, 75, 67 and 67.

Andre Stolz was due to play his first senior major thanks to winning the 2021 SParms PGA Legends Tour Order of Merit, however COVID-like symptoms forced the 52-year-old to make a late withdrawal from the event.