Back on one of his favourite courses American Peter Uihlein has played a brilliant first round to lead the ISPS HANDA Perth International.

Teeing off in the afternoon, Uihlein stunned with his 7-under 65 scored in challenging wind conditions. 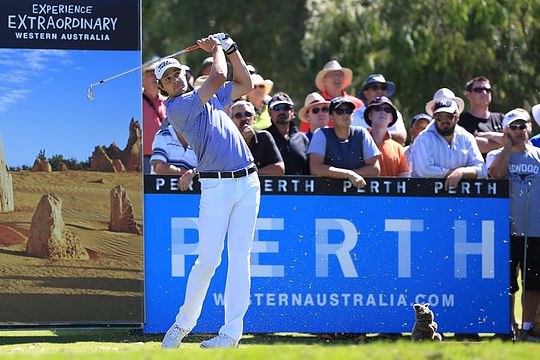 Peter Uihlein tees off during the first round of the 2016 Perth International (Credit: PGA Australia)

“Playing out here, it’s always a treat and it’s one of my favourite courses. It is an Alister Mackenzie course, and we don’t really get that many courses in America ‑‑ obviously we’ve got Augusta and then Cypress, but we don’t really get to play his courses that often. It’s always a treat when you get to play them…it’s just a fabulous golf course.”

While Uihlein’s round got off to an awkward start, missing the fairway with his iron shot off the 1st tee, he was happy to escape with a bogey when it could easily have been a triple.

He quickly recovered to add birdies to his card at the 3rd, 4th and 7th holes before a chip in eagle at the 9th really ignited his round.

Finishing with another three birdies on the back-9, Uihlein picked up where he left off after the 2014 ISPS HANDA Perth International when he finished tied 9th.

Playing in the morning field Indian Shiv Kapur battled through a shoulder injury that almost ruled him out of the tournament to shoot 6-under 66. He is joined by Frenchman Romain Wattel at tied second.

Sitting outright fourth after the first round is Rhein Gibson who fired 5-under 67 the day after flying into Perth from the PGA TOUR.

“I only got into town yesterday so this was my first time around the course since last time the tournament was here,” said Gibson.

“The trip I just did was a little difficult, in fact I showed up to Sydney not knowing where my bags were on Wednesday and luckily they were there on a different flight.”

The second round of the ISPS HANDA Perth International will tee off tomorrow morning at 6.40am with Uihlein in action at Lake Karrinyup Country Club at 7am.