Ben Schlottman went under the radar at Royal Melbourne firing successive rounds of 1-under 71 which sees the American leading the Australian Master of the Amateurs tournament in Melbourne.

Schlottman is at 2-under-par, a stroke ahead of local member Thomas Power-Horan with Power-Horan’s second round 2-under 70 the day’s low round.

Fellow Aussie Harrison Endycott and Korean Sung-Ho Yun is with Power-Horan at 1-under, with Andrew Schonewille, South African Paul Bomhoff, and American Aaron Wise at even par.

Royal Melbourne’s West Course dished out a challenge to this field as strong winds lashed this gem of a layout. Course management and a delicate short game was a must for any player and a number of weaknesses were exposed as the majority of the field failed to make any score with many racking up numbers in the late 70′s and early 80′s.

It was a day where brute strength needed to be put back into the bag and where a player had to put some thought into ball positioning and approaches into the greens. The majority of this elite amateur field failed to recognise this, yet despite the challenges a number of impressive scores still came in.

New South Welshman, Daniel Gale fired an impressive 1-under 71 to advance up the leaderboard, with Dale being just one of three to record a sub-par second round along with Korea’s Sung-Ho Yun.

Other respectable second round scores included Travis Smyth, who carded a even-par round, as did Andrew Schonewille. 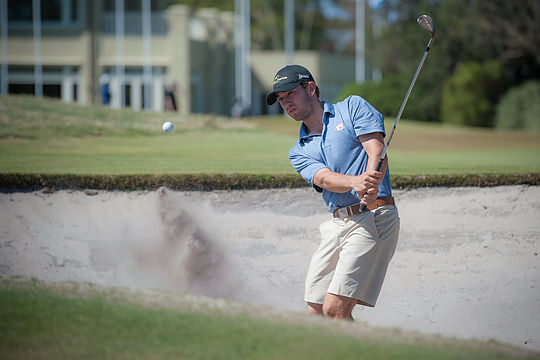 Ben Schlottman leads after the second round of the 2016 Master of the Amateurs (Credit: Anthony Powter)

Cameron John fired a 74 despite a triple bogey on the short par 3, 7th and the emerging star rebounded to fire a back nine even par 36. Kade McBride fired a 1-over 73 along with Isaac Noh, with both players enjoying the earlier conditions.

The first round leaders and marque players who for some had also teed off for a consecutive day in late time slots certainly copped the tougher conditions without the benefit of the traditional swapped early morning second round tee slots.

Zac Murray’s 6-under-par round yesterday ended with a 10-over-par round as he battled the tougher afternoon conditions under circumstances which would have normally seen him enjoy an earlier second round tee slot.

Highly ranked American Aaron Wise remains two shots off the lead after he followed his five under opening round with a five over today and will need to make a move over the closing two rounds to challenge for this title.