American and world number 8, Aaron Wise, secured his maiden international victory with a two stroke win over England’s Jonathan Thomson at the Australian Master of the Amateurs at The Royal Melbourne Golf Club.

Rounds of 67-77-68-71 saw Wise finishing at 5-under-par with Queensland’s Charlie Dann finishing in 3rd position at 1-under. Wise, Thomson and Dann were the only players of the 78 elite amateur field to break par for the tournament.

19-year-old Wise set the tournament alight with a hole-in-one on the 5th at Royal Melbourne during the first round and despite a difficult second round in windy conditions he was able to hang on to claim the title.

“At one stage I lost the lead on Saturday but was able to keep to my game plan and minimise the mistakes. This is one of the hardest tournaments I’ve played and it’s an honour to win a title like the Australian Master of the Amateurs.” 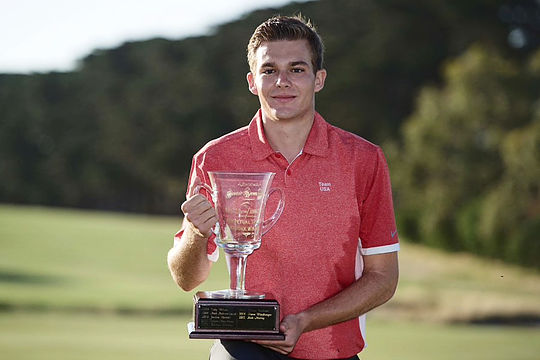 The West Course certainly threw out the challenges to this elite international field. Slick greens required precision from the tee to have the best angle of attack. Strategy as opposed to brut strength was required and many players struggled to post a decent score.

Wise had not played Royal Melbourne before but with the benefit of three days of practice he quickly recognised the need to respect the layout and play strategic golf.

“When given the opportunity to play Royal Melbourne I could not pass that up,” said Wise.

“I’ve never experienced anything like this. It’s been a great week and I’ve enjoyed it and to get a victory just tops the trip off.”

Young gun Cameron John fired a final round 3-under-par 69 to finish even for the tournament and in 4th position. Local member Thomas Power-Horan rounded out the top-5 finishing at 1-over-par.

The victory is Wise’s second major amateur title after winning the Pacific Coast Amateur in 2015.

Wise finished runner-up last year at the Western Amateur after Dawson Armstrong won the event on the 20th hole.