Byeong-Hun An has re-written BMW PGA Championship record books storming his way to an amazing six shot victory on the West Course at Wentworth.

The Korean carded a final round of 65 to finish with a new 72-hole low of 21 under par by two shots and relegate Miguel Angel Jiménez and Thongchai Jaidee into second place at 15-under par. 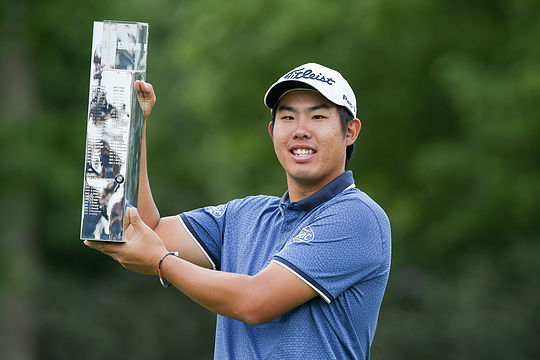 England’s Chris Wood was two shots further back in fourth after a closing 66 which included winning a BMW i8 for a hole-in-one on the 14th, a tournament-record fifth ace of the week.

An is only the second player to win The European Tour’s flagship event in their rookie season and claimed the first prize of €833,330.

The 23 year old – who became the youngest winner of the US Amateur Championship in 2009 at the age of 17 – moves from 132nd in the Official World Golf Ranking to inside the top 60 as a result, securing his place in the US Open and Open Championship.

Afterwards An hailed a “life-changing” victory, saying: “It’s like a fifth Major to me. It’s the biggest title I have won and gets me into a lot of events. This is life-changing.”

“I’m still really excited and over the moon right now.”

“I wasn’t expecting this. I didn’t know that a win was this close. It came all of a sudden. I’ve been playing well all year but I never thought I would win this event.”

“I played really well today. I was nervous at the start of the day but confident on every hole because I was hitting it well and putting nicely. I made some mistakes but being bogey-free I think is very good out here.

“It was great to go into the last hole with a six-shot lead and I love that I’m the first Asian to win this event. It’s great.”

An began the final round tied for the lead with Italy’s Francesco Molinari and, despite picking up shots at the second and fourth, was only one ahead at the turn thanks to a hat-trick of birdies from Jaidee from the fifth.

However, An then birdied the 11th and came within inches of an albatross on the 12th, the tap-in eagle giving him a three-shot cushion that became four when Jaidee bogeyed the 13th.

An made certain of victory with birdies on the 15th and 17th and a par on the last completed a hugely impressive performance from the Challenge Tour graduate.

Wood holed out with a seven iron from 178 yards on the 14th, prompting exuberant celebrations which ended with him taking advantage of the car’s gull-wing doors being open to try it out for size.

“I just about fit in there,” Wood joked. “Last night at the hotel I bumped into Miguel (who had the tenth hole-in-one of his career on Saturday) and I said, “Another hole-in-one, when is it my turn?

“All the players look on the 14th on Tuesday when we have a practice round and we think, ‘Wouldn’t it be nice, a BMW i8?’ You never think that it’s going to happen to you.

“I hit a great shot and it was a bit of a delayed reaction because you hear two cheers; one sounded like it just missed and the second one it went in.”

Wood, who spent five months on the sidelines due to a broken bone in his wrist suffered when he fell over during a tennis lesson in October, added: “It was a long winter at home and you do worry whether you’re going to come back to the player you were, but to finish top five in a marquee event here at Wentworth is a big boost in confidence.”

Richard Green and Marcus Fraser were the only two Aussies to make it through to the weekend – finishing T22 (5-under) and T27 (4-under) respectively.