Abraham Ancer landed his maiden PGA Tour title with a playoff victory at the WGC-FedEx St Jude Invitational, and in the process collected an impressive US$1.82 million first prize.

Ancer outlasted Sam Burns and Hideki Matsuyama to claim the victory with a 2-metre birdie putt on the second hole of a playoff. Ancer closed with a 2-under 68 to match Matsuyama and Burns at 16-under to force the playoff.

“This is surreal,” said Ancer, the former University of Oklahoma player who was born in McAllen, Texas. “I felt I left so many shots out there on the back nine, but you never know.”

Ancer became the fourth Mexican winner on the PGA Tour, following Victor Regalado, Cesar Sanudo and Carlos Ortiz, and the seventh player to win a WGC event for his first tour victory. He moves to 11th in the world ranking.

“It was definitely a lot of patience,” said Ancer who won the Australian Open in 2018 at The Lakes in Sydney. 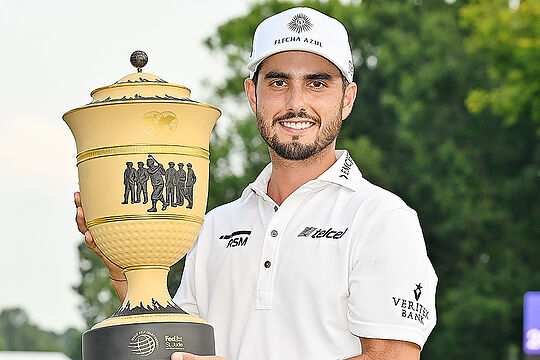 “It was pretty much survival mode. I had some looks coming in, I just was really far away. I hit some good putts but didn’t quite match the speed with the line or vice versa. It was crazy. I was definitely not expecting this outcome.”

Ancer has so far three professional wins including the Australian Open and a win on the Web.Com tour in 2015 at the Nova Scotia Open. Sunday’s maiden PGA Tour win from 121 starts comes after a number of runner-up results on the PGA Tour.

At the 2020 RBC Heritage, he finished runner-up on 21-under and then in May 2021, he again finished second at the Wells Fargo Championship, one shot behind Rory McIlroy. The form was certainly there and a top-10 at this year’s PGA Championship proved that when he carded a field-best final-round 65 for his first career top-10 in a major championship.

Harris English, the leader after each of the first three rounds, faltered on the back nine to card a 73 and to give Ancer, Burns and Matsuyama a chance. English was ahead by two strokes on 20-under at the turn, he then went on to play the back nine in 5-over.

English was gracious in defeat but it was clear that being put on the clock playing beside DeChambeau didn’t help his final round efforts.

Marc Leishman finished in a share of 36th position with Brad Kennedy in a share of 43rd. Matt Jones, Wade Ormsby, Cameron Davis and Min Woo Lee all finished down the leaderboard.