Antcliff claims third title of the year in Beijing

Maverick Antcliff has reeled off another win on the China Tour claiming his third victory at the Beijing Open, denying fellow Aussie, Bryden Macpherson by a stroke.

Antclilff finished at 5-under-par with rounds of 69-65-72-67 in another dominate display on the China Tour following earlier wins this season at the Bo Ao Open and Shenzhou Peninsula Open. 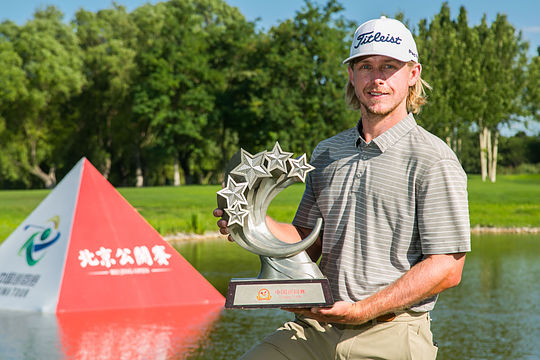 In his last seven starts in Asia, five of which have been on the China Tour, Antcliff has collected three victories and been inside the top-10 in the other four on the Asian and Korean Tours.

His consistency over the last six months has seen Antcliff’s world ranking move from 626th to his current high of 220th.

The China Tour Order Of Merit winner will qualify for the following European Tour season and Antcliff is certainly in the box seat to take that position.

Antcliff’s dominance on the China Tour in 2019 sees his prize money total at ￥449,050 (approx. A$93,000) to lead the Order of Merit, with his earnings so far three times that of the next best player in second position.

Antcliff turned pro following his senior season at Augusta University in 2015-16 and began competing on the Australian PGA Tour and the PGA Tour China.

In his first season on the PGA Tour Australasia he played in four tournaments and finished runner up at the first stage of qualifying school in 2016.

In 2017 on the Australasia Tour he played in seven events, winning the first stage of qualifying school and taking seventh in the final stage to earn his 2017-8 card.

Recent results certainly has Antcliff making his mark and with a likely succession to the European Tour for next season on the cards, the 26-year-old has made his goal of playing his way onto a main tour.