Maverick Antcliff shot back-to-back rounds of 6-under 66 over the weekend to win the China Golf Tour’s Shenzhou Peninsula Open by four shots on a leaderboard dominated by Australians.

It was Antcliff’s second consecutive victory in China having won the season-opening Bo Ao Open just a week ago. 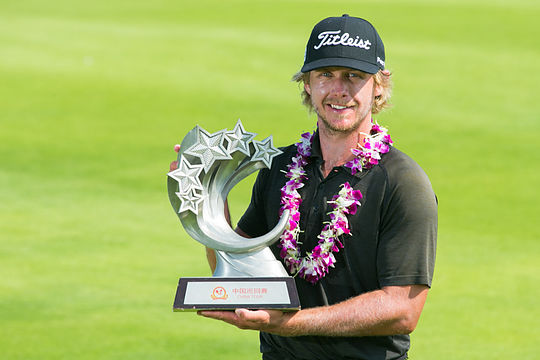 With the two-game winning streak in China’s island province of Hainan, the 26-year-old Antcliff becomes the third player to complete this achievement on the China Tour.

Out in 2-under 32 in the final round, Antcliff was tied for the lead with China’s Jin Cheng but made his move with an eagle at the par-5 10th.

He followed it up with consecutive birdies at 11 and 12 for a three-shot cushion with just six holes left to play and never looked back, firing the last at even par to finish at 16-under with rounds of 71-69-66-66.

This was a great tournament for the Australasians with New Zealand’s Kieran Muir finishing in a share of 2nd position at 12-under, Bryden McPherson in outright 5th, with Jackson Dick 6th and Kevin Yuan and Kade McBride running out the top-10 with a 9th place finish.

The China Tour will take a short break and returns on May 26 in Wuhan, Hubei Province.