Antcliff has played the feeder tour in China since 2017, his best result prior to the weekend a runner-up finish at the weather effected 2017 Hunan Taohuayuan Open, although he’s secured four top-5 finishes. 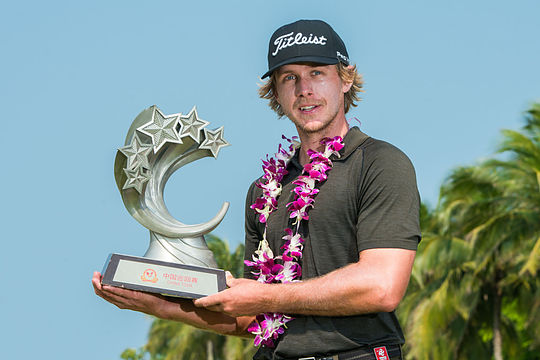 Antcliff turned professional after his senior year at Augusta University in 2015-16 and began competing on the PGA Tour of Australasia and the PGA Tour China.

In college he was instrumental in Augusta winning two Mid-Eastern Athletic Conference championships to advance to the NCAA regional finals. He also led the team’s stroke average as a freshman and recorded three top-five finishes before being named an All-American in 2016.

Antcliff also enjoys current status on the Asian Tour after finishing in a share of 7th at the 2017 Q-School Final stage before going on to finishing at 77th in the Order of Merit for that year having made the cut in 10 of the 15 tournaments to pocket just over USD$45,000.

Earlier this month a 4th place at the Bangabandhu Cup Golf Open handed Antcliff at cheque of USD$17,500, his biggest prize purse so far in Asia.

Sunday’s win sees Antcliff on top of the China Tour money list after taking out the opening event and his world ranking moves to 354th.

Another Aussie and former British Amateur champion, Bryden Macpherson, had a nice opening start also with a 9th place result and is making his mark in China.

Macpherson is another young talented professional looking to find his way on to a main world tour. He qualified for the Web.com Tour for the 2015 season but after failing to retain his card, he returned to PGA Tour China where he won twice and finished the season leading the Order of Merit, earning him a return to the Web.com Tour for 2016.

Macpherson had a disappointing 2016 season, lost his Web.com Tour card and played on the China Tour in 2017, winning the Fragrant Hills Beijing Open and finishing second in the Order of Merit.