Anthony Murdaca carded a second round of 68 to have a one stroke lead over fellow Aussie Todd Sinnott at the Asia-Pacific Amateur Championship being played at The Royal Melbourne Golf Club.

Murdaca is at 7-under-par with scores of 69-68 with Sinnott carding rounds of 67-71. Ten Aussies started the week with all making the 10-over cut mark for the weekend. 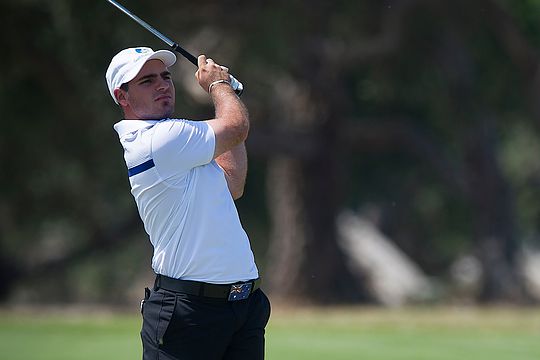 Jarryd Felton is the next best Aussie currently in a share of 9th position at even-par, along with Corey Crawford and Ryan Ruffels, seven stokes behind Murdaca.

Murdaca, 19, is a former dual Australian Junior champion winning in 2010 and 2013 and was able to keep his composure around the Composite course at Royal Melbourne on a day when scoring was difficult with firm and fast greens producing many a three putt from the field.

“I feel great about today’s round,” said Murdaca.

“I went out wanting to hit good shots and try to minimise the mistakes. It was tough in the afternoon and so I was quite happy with my game today.”

Sinnott, the overnight leader after opening with a 67, was slow out of the blocks moving to two over early yet managed to get his game in order following a birdie on the 16th, his seventh hole after starting on the 10th tee.

“I’m just trying to position my ball and keep it in the spots that I know where the ball is in play,” said Sinnott.

“I struggled earlier and didn’t feel comfortable with any part of my game to be honest. Then I was able to turn it around in the middle stretch and hit some good shots coming in.”

Position off the tee is paramount around the majestic Composite Course at The Royal Melbourne Golf Club, regarded as one of the world’s best layouts. Players not accustomed to the subtleties of the course were punished during the second round with the majority of the field struggling to break 75 and the final cut of top-60 and ties coming in at 10-over.

Chinese Taipei’s Cheng-tsung Pan, one of the premier players in amateur golf, is lurking at 3-under after he matched Murdaca’s 68, four shots back along with New Zealand’s Joshua Munn, who had the day’s low round of 67, China’s Guan Tianlang (68-73) and India’s Udayan Mane (72-69).

With an invitation to play in the 2015 Masters Tournament awaiting the winner and a spot for both the winner and the runner(s)-up in next year’s Open Qualifying Series for The Open Championship at St Andrews, these elite amateurs will be put to the test over the next two days both by Royal Melbourne and their resolve to hold it together to collect one of the biggest prizes in amateur golf – at start at Augusta.