Thai star Kiradech Aphibarnrat has had a short but successful visit to Perth taking out the ISPS HANDA World Super 6 Perth at Lake Karrinyup Country Club.

Aphibarnrat followed a similar path to his countryman Phachara Khongwatmai who qualified last in to the top-24 in 2017 and played his way to the final, only this time the honours lay with Thailand as he defeated New South Welshman James Nitties in the final.

It was a barnstorming finish from the crowd favourite who finished with an eagle and a birdie to claim his fourth European Tour title.

“It’s just been an awesome week. I don’t know how to explain, but I’m so happy. I’m working so hard. The last few months I’ve been getting really close and finally I’ve done it,” said Aphibarnrat. 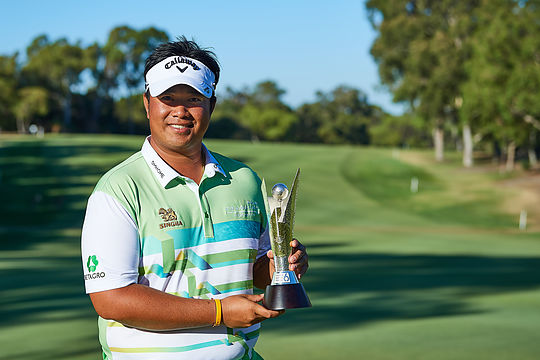 Arriving in Perth on Wednesday afternoon, Aphibarnrat got his first look at the course in round one of the tournament and immediately made an impression shooting 5-under 67, even par rounds on Friday and Saturday which meant he was part of the nine-man playoff to secure a spot in Sunday’s match play.

He said the lack of preparation may have been of benefit to him, playing some holes around the course without fear.

“First hole you just see clearly, second hole I hit driver, just 130 yards to the flag on the first round, and then I walked down the fairway and looked at my caddie saying, ‘did you just let me hit driver on this one?’ It’s so narrow, I tell him I won’t hit driver at all,” added Aphibarnrat.

“It was a little bit relaxing, go out there and when you get the decent start you lose the pressure a little bit and try to free your swing.”

He and Australian Anthony Quayle eventually played the 18th four times in round three before Aphibarnrat secured the final spot inside the top-24 for Sunday.

It was an opportunity Aphibarnrat wouldn’t take from granted; he defeated Ben Eccles (AUS) 1-up in round one and took Yusaku Miyazato through five trips on the Knockout hole, adjacent to the 18th fairway, to qualify for the quarter finals.

American Sean Crocker took Aphibarnrat through all six match play holes but the result eventually fell 1-up in the Thai Professional’s favour.

After playing the first two rounds of the tournament together, Aphibarnrat again met up with Victorian Lucas Herbert, the two big hitters putting on a fantastic display in the semi-final. A brilliant first shot on the Knockout hole proved the difference and Aphibarnrat advanced to meet New South Welshman James Nitties in the final.

After losing the first hole to Nitties, Aphibarnrat showed his class halving the second and winning the final three to take out the final 2&1.

“It’s really tough to get in the last 24. It’s been tough every single match that I play, I played in two knockouts. James (Nitties) is playing so good but he’s just unlucky at the end.”

“I believe if he just keeps doing what he does, one day he’ll be joining our Tour for sure. But I’m just really happy with the result.”

The larger than life character once dubbed ‘the Asian John Daly’ is delighted with his result having put in a lot of extra work to his game over the last few months.

His win is made all the sweeter after a string of near misses in tournaments on both the Asian Tour and European Tour.

“It means a lot. When you focus on something, you try hard, this hard, then I was finishing second and I’m not giving up. I’m trying so hard until I get it.”

The Novocastrian was noble in defeat considering how close he came to securing playing rights on both the European Tour and Asian Tour.

“It’s a sad way to go down considering another win might have got me some playing rights somewhere in the world because I currently have no status, but it was a great week,” said Nitties.

“Considering I was a four foot putt away from losing the first match, it was pretty positive stuff getting to the final.”

Lucas Herbert recorded a 3&1 victory over Horsfield to claim third place in the tournament.