In a performance that epitomises his aggressive approach to the game, Thailand’s Kiradech Aphibarnrat responded to a late charge from his opponent with a brilliant birdie on the final hole to defeat Robert Karlsson 1-up to win the inaugural Saltire Energy Paul Lawrie Matchplay in Aberdeen, Scotland.

The 26-year old was three up with four to play before losing the 15th, 16th and 17th, but held his nerve at the 18th to secure his third European Tour title and second of the 2015 season, in sensational style. 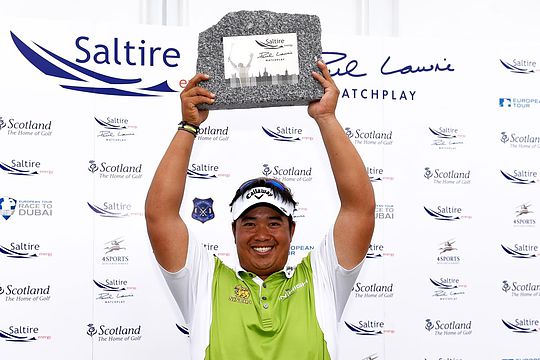 Karlsson recorded two birdies and a par from the 15th through 17th holes to draw level and put the pressure right on his younger opponent with a approach to within ten feet at the last. However, Aphibarnrat responded brilliantly by sticking his approach to four feet and when Karlsson missed his putt, he knocked in the putt to seal the win – his first outside Asia.

“I was striking the ball well and hitting it so good on the front nine, but then I lost a bit of energy and control.” he said, “I started pulling some drives but I have to say I putted very well today and sank a lot of important putts, especially the putt to win which was very short but it was great to see it hit the middle of the hole.”

The vanquished Karlsson, a former European Ryder Cup representative, entered the week with few expectations having missed his last six cuts on the European Tour.

In fact, the Swede had entertained the notion of withdrawing from the event to work on his game but a runner-up finish and a €116,500 payday more than justified his decision to play.

“He’s tricky to play against because he’s playing such a free and flowing golf it makes it slightly different. You never really know what he’s going to do, which makes it tricky to stay on your own game because he’s so aggressive.”

While any win is opportune, victory in a matchplay event against quality opposition would have International captain Nick Price sitting up and taking notice as the clock ticks down to the bi-annual Presidents Cup matches in South Korea in October.

On a personal level, the win – on a traditional Scottish links at Murcar – was of particular significance to Aphibarnrat as he pursues success around the globe.

“This is a very important win for me because it is the first time I have won outside Asia. I have always said that we are just a little small country in Asia and that my next step to win in Europe, so I am so happy and so proud of myself that I was able to prove we also can win out of Asia.”

“It’s an important win for Thai and all Asian players.”