Thailand’s popular Kiradech Aphibarnrat eagled the 17th to force his way into a play-off and then birdied the first extra hole to secure a second European Tour victory in the inaugural Shenzhen International.

Aphibarnrat defeated China’s Li Hao-ton after both players had completed regulation play locked at 12-under par. 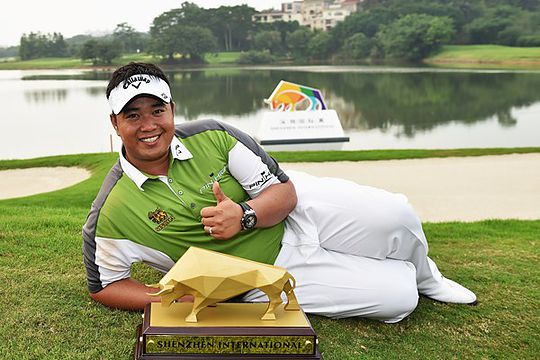 The win is Aphibarnrat’s second since capturing the 2013 Maybank Malaysian Open title.

Li, having completed his round, was waiting to see if he would become to first Chinese player to win a European Tour event on home soil when Aphibarnrat sensationally eagled the 17th to draw level on 12 under par.

An excellent approach from a fairway bunker gave the Thai a putt to win the tournament but his effort slipped to the right of the hole, meaning they would play the 18th again.

Aphibarnrat repeated his approach to find the middle of the green while Li left himself a much longer putt.

And after the 19 year old could not find the hole, Aphibarnrat sunk a beauty for birdie and celebrated loudly in contrast to the stunned crowd.

Aphibarnrat said: “Special thanks to my caddie, he was always pushing me. When we were two behind on the last two holes he said you have not lost, we have not signed the scorecard yet and he was completely right and I just got the job done.”

“I had a chance to win in 72 holes but the putt in the play-off is the best putt I have ever made in my life.”

The 25 year old has had a tough time since winning in Malaysia, adding: “I’ve been struggling for a year. I lost my coach (Natpasit Chokthanasart, who died in December 2013), changed my equipment. It’s a big changing time after I won.”

“It’s been like that for a while. I haven’t been at the top of the leaderboard but finally I had the chance to do it. It was tough to stay there.”

The result was hard on Li, yet to win on the European Tour, who shot a five under 67 in his regular round thanks to some excellent approach play that yielded six birdies in windy conditions.

Aphibarnrat, having made four bogeys, was reliant on his eagle to end on level par for his first 18 holes.

Until he made that remarkable gain at a hole he had double-bogeyed on Saturday to let slip a lead of five shots that stood at two overnight after he dropped another at the last, Tommy Fleetwood was Li’s nearest challenger.

Fleetwood’s third straight round of 69 left him on 11 under overall, one clear of seven men including Peter Uihlein, who was second overnight before going round in level par.

Alvaro Quiros earlier hit comfortably the round of the week, a nine under par 63 to reach eight under overall.

Starting brilliantly with five straight birdies and a front nine of 29, the Spaniard was in contention for the European Tour’s first round of 59. Bogeys on the 12th and last holes were the only blemishes of an effort that featured a sensational 11 birdies.

“A 63 in any golf course in the world is a good score,” Quiros reflected.

The second most impressive early score of the day came from two-time Masters Champion Bubba Watson, whose 65 was jointly the best round of the week before Quiros completed his. Watson finished on five under overall.

“I wish I would have putted better in the first three rounds,” he said.

“I putted well in the last round. All in all it was a good test. It shows me what I need to work on. It shows me that I can play outside the US, especially today.”

Wade Ormsby topped the small Aussie field to make the cut this week, finishing in equal 11th place with weekend rounds of 67 and 66. Scott Hend closed in a tie for 15th at 8-under with Marcus Fraser another two shots back in equal 25th.

The European Tour stays in China for the Volvo China Open, which tees off in Shanghai this Thursday.