Marcus Armitage claimed his maiden European Tour title at the Porsche European Open this morning after a sensational final round at Green Eagle Golf Courses.

The 33-year-old from England made six birdies and an eagle to race to 8-under for the day and 9-under for the week. After wins on the EuroPro Tour and the Challenge Tour and struggles just to retain his European Tour card, Armitage was understandably emotional having finally claimed his first victory on the European Tour. 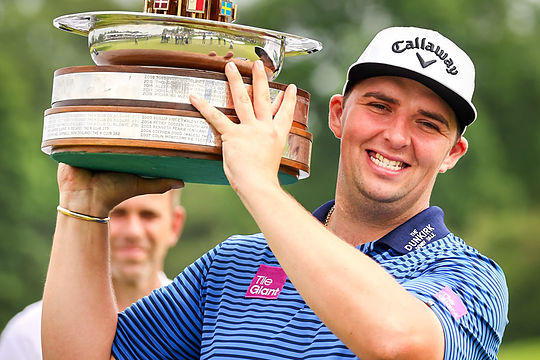 “It hasn’t really sunk in yet, it’s a new feeling I suppose,” said Armitage. “When I had a practice round the other day I’ve never lost so many balls in a practice round in my life. To be stood here being Porsche European Open champion is pretty cool.”

Armitage’s win is the fourth consecutive victory by an English player at the event following Paul Casey, Richard McEvoy and Jordan Smith.

What’s In The Bag: Marcus Armitage

After starting the final round four adrift of leaders Southgate and Aussie Maverick Antcliff, Armitage swiftly made up ground with two birdies in his first three holes. He then went onto close out the tournament with an impressive final round 65, the win moving him into the top 30 the Race to Dubai Presented by Rolex and earning him a spot at the US Open Championship.

Antcliff, who shared the 36-hole lead, needed a win or a top-3 place to earn enough points to qualify for next week’s US Open. Jason Scrivener was also sitting inside the top-10 heading stateside before his 55th placing saw him fall from 8th to 12th in the standings.

The tournament was reduced to 54 holes due to quarantine issues for players, caddies and staff from the UK.