Josh Armstrong and Korea’s Gayoung Lee have won the Avondale Medal and Bowl respectively with solid victories at the Avondale Golf Club in Sydney.

Armstrong fired rounds of 67-69-66-71 to finish at 11-under-par for a stroke victory from England’s Jack Singh-Brar. The win is Armstrong’s first national ranking event title and flows on from junior wins at the Jack Newton International and the Greg Norman Masters.

“It was a grind out there, but winning this is a real confidence booster,” said Armstrong.

“I was able to keep my game in check and waited for the birdies to come. Overall, I was pleased with the way I held it together to get this win.”

Armstrong was certainly pushed by Singh-Brar, not to mention late charges from two time winner of this event, Harrison Endycott, who got within a stroke of Armstrong before a quad on the last saw the Eisenhower representative fall into a share of 7th position.

England’s Bradley Moore finished in outright 3rd position at 8-under-par, with Queensland and Victorian Amateur champion, Dylan Perry, in 4th position at 7-under. 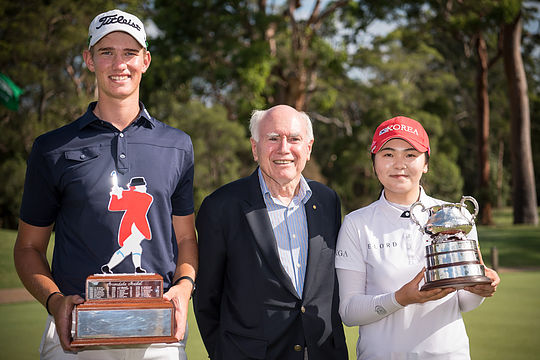 Min Woo Lee, runner-up last week in Melbourne to Matias Sanchez at the Australian Amateur fired the low round of 66 for the final day moving fifteen places to finish in a share of 5th position alongside Canada’s Stuart Macdonald at 6-under-par.

Armstrong is coming off a string of top-placed finishes including a runner-up at the Junior World Championships at Torrey Pines late last year.

“Winning at Avondale certainly is a nice start to the year,” said Armstrong who recently was added to the Golf NSW High Performance squad.

“I felt comfortable out there this week, yet there are still a few things that I need to work on and get right.”

Armstrong’s win will see him gain a start in the Queensland Open and from there the 17-year-old hopes to embark upon a successful US tour and gain starts in as many of their main amateur events as he can.

With a current R&A world ranking of 370 following the Australian Amateur, once the re-rank comes out later in the week Armstrong will move inside the top-350 in the world. It’s a step in the right direction as he hones in on the all-important top-50 who receive exemptions to top events like the US and British Amateur.

“That’s the plan, try and work on my ranking and get as much exposure as possible,” says Armstrong.

“I’m working on a few things with Gary [Barter] and things are starting to fall into place. I’m learning to be more patient on the course and let things happen. That’s what I managed to do this week and the result followed.”

In contrast to the tight men’s finish, Korea’s Lee smashed the women’s field finishing at 28-under-par and a 13 stroke win over teammate Soni Lee.

The women’s event was dominated by the Korean team taking the top-6 places. The best of the Aussies was Jhye Park who finished at 2-under-par and in a share of 7th position.