Rookie professional Josh Armstrong fired an opening course record 63 followed by a closing round of 69 to take out the Murray Open at Corowa Golf Club.

Armstrong finished at 14-under-par for a one stroke victory over Western Australia’s Daniel Fox. Charlie Dann took outright third position at 12-under-par after also opening with a 63. 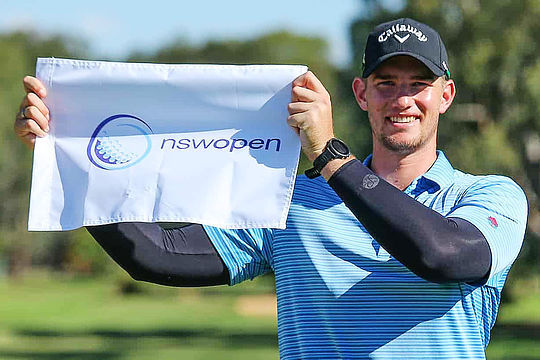 “It was good fun out there,” said Armstrong following his win.

“I’m not going to lie, It was a little sloppy, through the first few holes on the backline, I was missing every fairway and I had to scramble a few times. The eagle on 15th really helped me, so I’m very happy.”

The win gives Armstrong a start at the NSW Open next month and the added bonus of winning one of the six Regional Open series, an initiate of Golf NSW.

With a $50,000 purse on offer at each tournament for pros, the top three place-getters (professional or amateur) at each tournament will secure a start in the 2021 NSW Open to be held at Concord Golf Club beginning on March 25th.

Armstrong left an amateur career just a few months back having won the 2017 Avondale Medal and was a medallist at the South Australian Amateur in 2018. His best international result was medallist at the 2019 New Zealand Amateur and a tied 9th at the Players Amateur in the USA.

The remaining tournaments on the series calendar include the Queanbeyan Open from 24th February and the South Coast Open starting 28th February.