Arnaus, who hails from Barcelona in northeast Spain, trailed overnight leader Bekker by seven shots at the start of the day before firing an impressive final round 7-under 65 to force the playoff with the pair finishing the regulation rounds at 11-under-par. 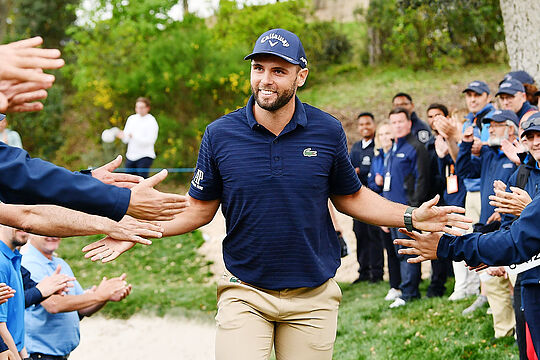 In the playoff, Arnaus and Becker made par on five trips to the 18th hole, but when they went to the 17th Bekker’s bogey handed Arnaus the title.

“It’s a dream come true,” said Arnaus, who has five runner-up finishes on the European Tour.

“I’ve been looking for this one for a while. To be able to come through here, where I practice in the summers, they take care of me so well. I know the course quite well. I’ve been able to play some really good golf and to do it here is special.”

Arnaus turned professional in late 2017 and reached the final stage of the European Tour Q-School. He had a successful first year as a professional, playing mostly on the Challenge Tour.

He won the end-of-season Challenge Tour Grand Final by a stroke from Victor Perez to finish second in the Order of Merit and earn a place on the 2019 European Tour.

As an amateur he played US Collegiate golf for Texas A&M University and won the 2017 Spanish Amateur.

Sunday’s victory moves Arnaus to a career high 52nd in the world rankings and saw him pocket a handy €322,614.44 in prize money.

Jason Scrivener finished the best of the Australians in a share of 18th position at 4-under-par, with Maverick Antcliff tied for 63rd to be the only other Aussie to make the weekend.

The DP World Tour moves to the UK for this week’s British Masters at The Belfry.