A former winner on the PGA Tour of Australasia Scott Arnold set the pace early posting a 5-under 67 with Aaron Pike later matching the number. 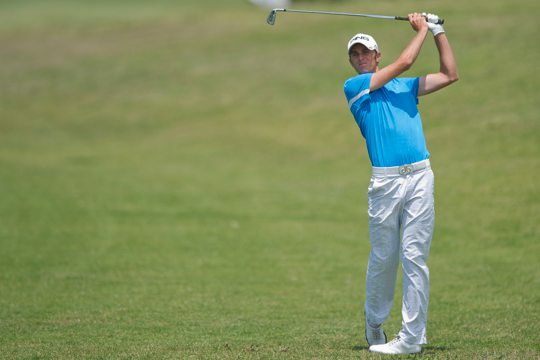 The pair is approaching the week with different attitudes; Arnold is playing more conservatively.

“I think you always expect to play well but you have to take it one shot at a time, I know it sounds easy, but you can’t get ahead of yourself,” said Arnold.

“Especially in Q-School weeks, I have played a lot of them, you never know what is going to happen you just have to put your head down and try to do the best you can.”

“I play a bit safer than I usually do in tournaments, I don’t want to do anything stupid and make a stupid score when you don’t have to.”

“You have to play smart, hit your shots, take your birdies when you can and play for pars.”

But it’s just another week on Tour for Pike.

“I don’t feel like I will approach this any different from the Australian Open or a NSW Open. It’s the same for me, I just go about my business,” said Pike.

“You see some of the guys maybe get a little scared at times, but at the end of the day its same game whether you are playing in a tournament, at Q-School or anywhere else.”

But what they have in common is their praise of Victoria Golf Club; the Melbourne Sandbelt layout is highly regarded as one of Australia’s premier courses.

“It’s amazing. Anytime you can get to come and play the Victoria Golf Club, I’m chuffed; I love it,” said Pike with Arnold adding, “I played the Masters here in 2010 and made the cut so I played all four rounds, it’s in great shape which makes it quite easy to play.”

“I had a couple of eagles, I finished with an eagle and had an eagle mid-way through the round on a short par-5,” added Pike.

“I played really well, I hit a lot of good shots, it felt a little scrappy at times but there were a lot of upsides.”

Playing through a chest injury New Zealander Ben Campbell fired 4-under 68 to be tied third with compatriot Michael Long after the first round.

Rounding out the top-5 on 3-under 69 are Rory Bourke, Leigh McKechnie, R.J. Caracella and Jake Stirling.