China’s Ashun Wu took pride of place after capturing his second European Tour title at the Lyoness Open in Austria.

The 30 year old, whose previous victory came at the Volvo China Open last year, finished the week on 13 under after carding a closing 69 on Sunday. 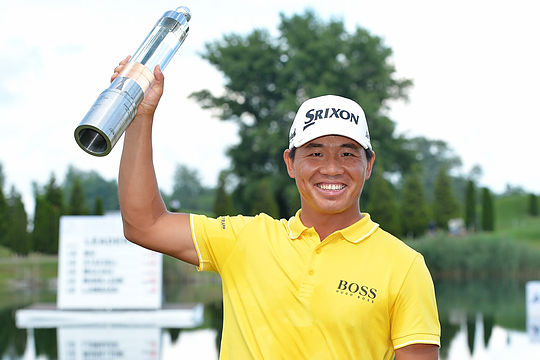 Spain’s Adrian Otaegui finished second on 12 under, with Englishman Richard McEvoy another stroke back after dropping his only shot of the day at the 18th.

Beginning the day one shot behind overnight leader Zander Lombard, Wu opened his round with a birdie at the first to join the South African at the top of the leaderboard.

Wu grabbed the outright lead when he tapped in his birdie putt at the third, and despite hitting a tree branch with his second shot, he made a remarkable birdie at the fourth to extend his advantage to two strokes.

The 30-year-old dropped a shot at the fifth but finished his back nine with a flourish, carding back-to-back birdies from the eighth to move to 14 under par and go three clear at the top of the leader board.

But after taking a penalty drop when his second shot went over the back of the green, Wu carded a double bogey at the tenth to slip to 12 under and see his lead over nearest challengers McEvoy and Otaegui reduced to one shot.

Wu then missed his eight foot par putt at the 11th to create a three-way tie at the top, before slipping into second place when McEvoy birdied the 13th.

A birdie at the 13th moved Wu back into a share of the lead before another gain two holes later saw him stand alone at the top of the leader board.

Otaegui fired a birdie at the 16th to join Wu at the top of the pile but after the Spaniard dropped a shot at the next, pars at the final three holes were enough for the 30 year old to secure the trophy.

Wu was thrilled to win the tournament. He said: “I am very happy right now. It was a very exciting finish and I still cannot believe it, but my playing partners were really good today and the scores were very close.

“At the tenth and 11th holes I just played two bad shots. I still kept working after that to do my best to make birdies and I did that.

“I just kept focused over the last putt and I talked to my caddie and he said, ‘it’s no problem, it’s an easy line so just putt it in the hole’.

“It’s been my first time playing in Austria and the course was very good this week. The sponsors have been great and I have had some Chinese friends here supporting me so I must thank them all.”

2014 Australian Masters champion, Nick Cullen, finished in a tie for 10th to post the best result of his European Tour career.