At 35, Adam Scott knows it’s time to get serious

There could be some fireworks from Adam Scott, not just this week in the US Masters, but in the next few years.

Scott admits he was something of a slow starter as far as being a contender in the major championships is concerned. 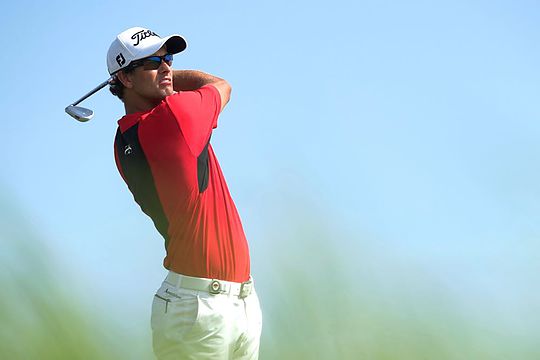 Yet at 35, he has now worked out that not too many players do win majors after they turn 40.

So with his life in order, his swing as good as it’s ever been and his putting no longer regarded as a problem, Scott is ready to annex some more major titles starting with this week’s Masters tournament starting tonight.

The popular Australian gave a lengthy interview with the PGA Tour last week and gave an amazing insight into where he was at both with his golf and his life.

With his daughter coming up to her first birthday, it seems Scott has never been more settled and focussed on where he wants to be.

And with more titles than any of the current players under 40 still on the PGA Tour, Scott knows now is the time to really make his mark and add to his lone major championship, the 2013 Masters.

Even Scott isn’t sure if he’ll be out there plying his trade on the Seniors Tour when he turns 50.

But he does promise one thing, if his game is holding up at 50, he’ll definitely be taking his place in the field at Augusta and taking it to the next generation of young guns coming through.

“Of course I’m always going to play golf,” he said.

“It’s impossible to know in what capacity. I have a kid who is going to go to school somewhere at some point. I’m going to make some big decisions about where that will be.”

“I’m from Australia, my wife is from Sweden, and we live elsewhere.”

“I know things are going to happen but for the moment, I know I can kind of have a good plan and theme running for the next five years, and I’d like to capitalise on that.”

Even with the swing many label as the finest in golf, Scott revealed he would love to have Phil Mickelson’s short game.

Yet it’s Bubba Watson that Scott suggests might be the man to beat at Augusta this week.

“Well, he has won two of the last four Masters…and he’s on a hot stretch,” said Scott.

“He also has a huge level of comfort on the golf course.”

“He’s an incredibly talented player; none of it is really conventional, but he gets the ball in the hole in the least shots a lot of times.”

“I just picked a name because I thought that was the easiest one to pick. It’s hard to not put other guys in there, too, any one of these top players.”

“Jason Day, maybe this is the week he plays his best this year and he wins, because he’s got the game to do it.”

“So many guys have the game to do it. I’m just kind of going off the form and how each guy must feel at Augusta.”

“The firepower that Bubba takes, if he hits good drives at the right time, I mean, he’s left with nothing into some of the holes.”