Atwal trailed by one heading into the par five 18th hole at the Els Club Dubai but emerged victorious with a closing birdie while a nervous Wang posted a six, after finding a bush in the desert wasteland beside the green. 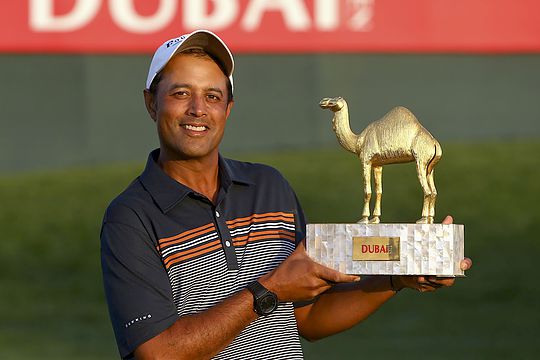 “This one feels really special,” beamed Atwal, whose last victory came at the 2010 Wyndham Championship on the PGA Tour.

“I think the last time I won on the Asian Tour was 2008 (Maybank Malaysian Open). I’ve gone through some really tough times the last few years with injuries and losing my card on the PGA TOUR and all that stuff. It was at a point where I almost wanted to quit. Thanks to a few of my family and friends, I didn’t, and here we are.”

19-year-old Wang produced a flawless outward 31 and led by three shots at one stage before his late blemishes. He opened the door for Atwal with a second bogey of the day on 17 when he three-putted before missing a 10-foot par attempt on the last hole.

“I had a lot of pressure. I just tried my best. I don’t have any regrets. I think I did my best,” said Wang. “I just tried to play my game, but I cannot do that because of the pressure.”

NSW’s Jake Higginbottom fired a superb 64 to tie for fourth place with Thaworn Wiratchant at 12-under and wrap up his Asian Tour card for 2015 in the process. It continues a strong finish to the year for Higginbottom after finishing sixth in the Australian Open and tied 7th in the Indonesian Open the following week.

“I knew I had to go out there and go low to try to keep my card.” Higginbottom said.

“I felt I played well all week but just couldn’t get anything into the hole. It was nice to hole a few putts today. It’s either back to Q School or not, so I had nothing to lose.”

Former Open champion Darren Clarke of Northern Ireland started the day one off the lead but was never a factor as he signed off with a 72 for tied 15th place.