Augusta National Chairman, Billy Payne delivered his now annual ‘State of the Masters’ address and announcing big changes to the qualification process for the Masters.

However there was both good and bad news for the PGA Tour. 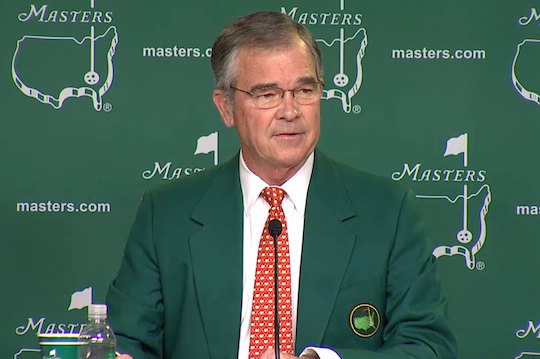 Payne announced this morning that no longer will the top-30 players on the FedEx Cup Play-Off series qualify for the following year’s Masters but then the winners from those events making up the Tour’s ‘Fall Series’ will earn an Augusta invitation.

Payne outlined changes to the Masters qualifying saying: “During the past 12 months, we have gained a more complete understanding of the modifications to the PGA Tour schedule and have made appropriate changes to our qualifications to adhere to our Founders’ philosophy.

“As many of you know, I have been personally fully committed to players gaining entry to the tournament after winning a PGA Tour event.”

“All of us take great pride and pleasure in seeing a tournament winner beam with pride and excitement knowing that his victory had earned him an invitation to the Masters.

“This, of course, has recently come with the caveat, that the events provide a full‑point allocation for the season ending Tour championship.”

“With the PGA Tour’s new schedule structure changing later this year, I’m happy to announce that our qualification of tournament winners will continue, including for those who win the events providing full points in the fall.”

“With the reality thereby of adding competitors to our field, we have decided to amend three of our qualifications in an effort to maintain similar field size for the 2014 Tournament.”

Payne did announce a few changes to the qualifications for the Masters, beginning in 2014 with the six events that formerly made up “the Fall Series” have been given equal billing in the Tour’s new wraparound schedule and its winners will now earn an automatic berth into the Masters.

Augusta National returned to its practice of inviting Tour winners the year after the FedEx Cup began in 2007.

“All of us take great pride and pleasure in seeing a tournament winner beam with pride and excitement knowing that his victory had earned him an invitation to the Masters,” said Payne.

Also at the conclusion of the first two rounds of this year’s Masters, the cut will be increasing from 40 to 50 players and ties, plus those within ten strokes of the leader.