It was another win for Western Australian golf with Perth’s Connor McKinney adding the prestigious St. Andrews Links Trophy to his Australian Amateur trophy with a two-shot victory on the famed Old Course that in a month’s time will host the 150th Open Championship.

The 19-year-old McKinney, who was born in Scotland but moved with his family to Perth at 12-years-old, is the second Australian to win the coveted tournament, joining Victoria’s Stuart Bouvier who captured the second hosting of the event back in 1990. 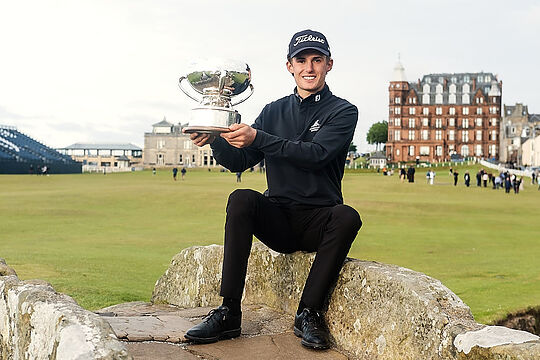 McKinney, who led on day one with a 64, posted a final round 65 to win with an aggregate of 16-under (272) after two rounds on the Jubilee and two on the Old Course.

“To win the Australian Amateur was my previous highlight, but to win at the Home of Golf is pretty special, you can’t ask for more than that,” he said. “I was born just an hour from here as well.”

Though behind on day four, McKinney set-up his victory with a run of six birdies in eight holes, starting from the 7th, to turn the tournament back his way. He bogeyed the notorious Road Hole 17th, which was the lone dropped shot of his last round.

“I struggled in the third round in the morning, but I finished with a birdie there and that gave me some real momentum for the final round.”

“Back in Perth nearly every afternoon we get a good bit of wind, and my home course is pretty exposed to it, so even though it was tricky I was used to it.”

“It’s pretty cool to play the course as it’s getting ready for the 150th Open. You’re picking the lines off the tee off the tv towers, and walking up 18 there was a pretty special thing.”

McKinney led on day one after a sizzling 64 but with Brady, also from Perth in Western Australia, seizing a three-shot advantage on the field after 54 holes.

Since moving to Australia, McKinney has been a frequent visitor to his Scottish homeland and his grandparents, having played in both the Scottish Boys Championship and the national amateur championship in 2018.

One year later, he was the leading qualifier for the match-play stages of the 2019 British Boys Championship in England. That notable feat led to him being selected for the Great Britain & Ireland Boys team that lost to the Continent of Europe in the annual match for the Jacques Leglise Trophy.

Second placed Brady looked as if he may be able to apply some late pressure but a bogey on 13 and a double bogey on the 16th, which he partially rectified with a birdie on the Road Hole 17th, took the wind out of his sails.

Robert Moran (IRL) and Arron Edwards-Hill (ENG) finished third and fourth on countback, both completing their scoring with rounds of 69.

Moran looked like he was on course to set a challenging clubhouse target but after a day of birdies, a bogey on 15 and a double on 17 saw him eventually having to settle for a 275 (-13) score.

Edwards-Hill, who was the only player in the field to shoot in the 60′s in every round, recorded just four bogeys during the tournament but just couldn’t get enough birdie putts to drop.

Frenchman Paul Beauvy followed the example of Moran and Edwards-Hill by shooting rounds of 67 and 69 on the final day to claim a top 5 finish.

Runner-up at this year’s Australian Master of the Amateurs and 9th at last week’s Scottish Men’s Open Championship, Andre Lautee, finished in outright 10th place on 8-under while Harrison Crowe and Jack Buchanan shared 25th to wrap up the Aussies who made it through all four rounds.

First played in 1989, the prestigious trophy has been contested by the likes of Rory McIlroy, Geoff Ogilvy, Ernie Els, Lee Westwood, Trevor Immelman, Padraig Harrington, Justin Rose and Francesco Molinari. Rose won the title in 1997, the year before he turned pro.