Aussie Antcliff closes in on US Open spot in Hamburg

Australia’s Maverick Antcliff is seeking a double celebrating with a hopeful victory at the Porsche European Open in Hamburg, Germany.

Not only did the 28-year-old go with some six inches of earning a spanking-new Porsche for an ace at his penultimate hole but the Queenslander is just one round shy of a maiden European Tour victory heading to Monday’s last day of the historic 54-hole event. 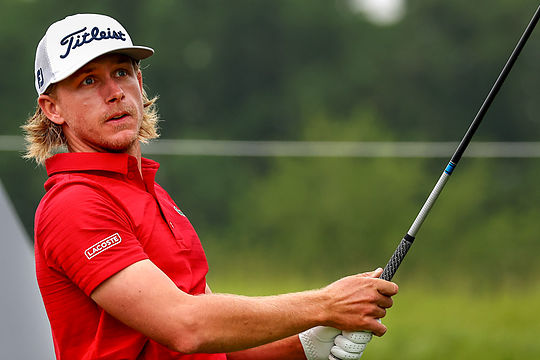 The event, first staged in 1978, was reduced to 54-holes and a Friday start due to COVID-19 related travel restrictions into Germany.

Antcliff, who was looking very much like fellow Queenslander Cameron Smith with his ‘mullet’ haircut, muscled his way to the front on the back nine, birdieing his closing three holes for a day two 4-under 68 to move to the top of the leaderboard on five-under par.

The Beaudesert-born Antcliff was then joined by England’s Matthew Southgate who signed for 69.

“It was a nice finish, obviously quite hot”, Ancliff said. “I was just trying to stay patient out there and hit some nice shots coming in. It was good.”

“There are a lot of really good holes out there, the par fives are long. You just have to be in position and when you get a chance just capitalise on it”.

And as for going so close to earning himself the keys to Porsche, Antcliff remarked smiling: “I’m a big Porsche fan, so that would have been a nice kicker. I’ll take two there every day though”.

Past Australian-born winners of the European Open include Greg Norman (1986), Peter Senior (1990) and Mike Harwood (1991), who won in the week after finishing runner-up to Ian Baker-Finch at The Open.

And if Antcliff should win he will join seven other Aussies in the June 17th starting US Open and qualifing for a Torrey Pines tee time by virtue of finishing top-10 in a three-event, mini European Tour/US Open money list that ends in Germany.

Antcliff is currently well down the list but a win, or a top-3 at worst, would see him sneak inside the top-10 on the US Open qualifying list.