Australia’s Cory Crawford has broken through to win his first major amateur title with a three stroke win on Sunday at the Malaysian Amateur Open.

Crawford, 21, fired rounds of 71-71-66-74 to finish at 6-under, three ahead of Singapore’s Marc Ong. Fellow Aussie Jarryd Felton also had a great tournament finishing in a tie for 3rd at 2-under along with China’s Zihao Chen. 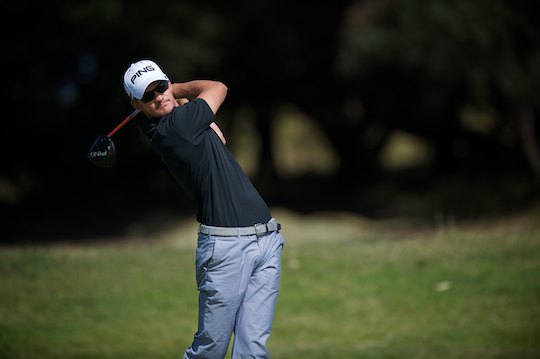 Crawford’s win comes as no surprise following a string of top-10′s in Australia this past season, including a tie for 5th at our biggest event the Australian Masters of the Amateurs.

Crawford has been knocking on the door of a major title and on Sunday proved he’s got not just the game, but the mental fortitude to compete on the world stage.

“I was happy with the way I was able to close this event out,” said Crawford.

“I played four rounds of solid golf on a very hard layout against a strong field. My swing felt good all week and I managed to keep my mistakes to a minimum.”

Crawford possess one of the sweetest swings in amateur golf. Free flowing and with a smooth rhythm. It’s a swing that obviously can work under pressure and it proved its weight during Sunday’s final round.

“I keep my swing very basic,” says Crawford, who is another success product of Queensland’s Hills College where Jason Day was also a former student.

“I might tinker with it a little, but overall it’s where I want it to be. On Sunday it held up to the pressure during the closing stages. That gives me a lot of confidence now heading to the US.”

Crawford has scheduled five events so far this US summer including the Dogwood Invitational and Sahalee Players. Following his victory in Malaysia, he plans to apply for one of the big US events, the Western Amateur which is played in August in Chicago.

“I’ve not applied to play yet, but I would love to compete at the Western Amateur and I’m also considering pre-qualifying for the US Amateur.”

With an R&A world ranking currently just outside of the top-200, Crawford does not enjoy the benefits of being inside the much desired world’s top-50, which gain automatic entry to the US and British Amateur.

“I need to compete well in the international events this season to get my ranking down,” says Crawford.

“I have two more years to go as an amateur and the goal is to get as many big wins as I can in that time then review where I’m at.”

At present Crawford is enjoying the moment. His breakthrough international victory giving him the belief that he can compete with the best and it’s the confidence boost he was after.

“I’ve been in the mix and been close a few times recently and to finally breakthrough to get a victory certainly gives me the confidence to move on.”