Cameron Davis was in reach of winning the English Men’s Open Stroke Play championship having lead the tournament for 54 holes yet a costly three putt on the final hole gave the tournament away to Englishman Jamie Bower to win the Brabazon Trophy by a single shot at London Golf Club.

Bower shot two-under par 70 to finish on 12-under but only after play had been suspended with Bower and Davis on the 18th green due to a violent thunderstorm. 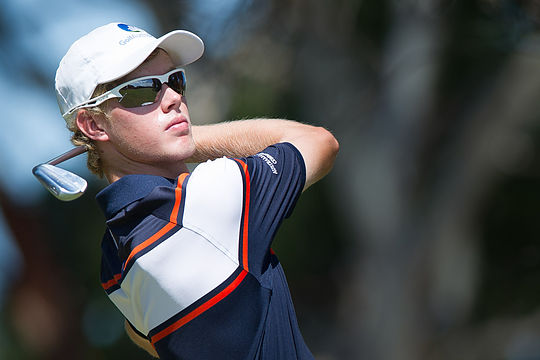 When they returned Bower two-putted for par and victory, while Davis missed a short one which would have taken the title battle into a play-off.

Davis began the final round with a two-shot buffer over Bower, however, when Davis made bogey on the second hole while Bower secured a birdie the pair were all even.

The closing back nine saw Davis card three bogies and two birdies for a 1-over-par 37, yet Bower remained calm, firing three birdies to two bogies for a 1-under-par total and two stroke swing over the Aussie.

In 2015, he won at home claiming the Yorkshire Amateur. Earlier in the month he made the top-16 at the British Amateur and is currently ranked 37th under the R&A World Amateur rankings.

To Davis’ credit his UK tour has seen him as arguably our most consistent performer.

A course record 6-under, 65, at Rowallan Castle Golf Club in Scotland during the opening round of a tri-nation challenge between Scotland, Australia and South Africa, a top-10 finish during the British Amateur qualifying before making it through to the round of 32 sets up a fantastic platform for the world number 13 before heading to the US to play their main amateur tournaments.