Mark down the name Louis Dobbelaar as a golfer we may be talking about for years to come.

And even if he does happen to not make it in the big time, they’ll be talking about the young Aussie’s finish in the New Zealand Amateur well, for ever. 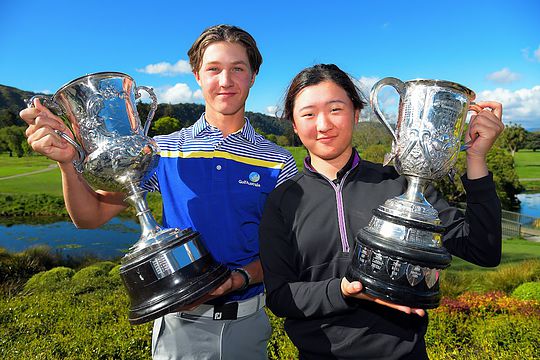 Just 15-years-old, Dobbelaar’s golf throughout the week at Royal Wellington had to be seen to be believed.

The Golf Australia national squad member survived one of the most epic runs imaginable through a big match play event before turning the tables on Spearman-Burns.

Indeed Dobbelaar was behind for most of the 36-hole final and despite several fightbacks found himself three down walking to the 30th tee and staring defeat squarely in the face.

Dobbelaar then stunned his opponent by winning five holes in succession to take a two-up lead.

A par on the 35th was enough for him to take his slice of history at a club where he holds a country membership with his father and a swag of other relatives based near Wellington.

“It feels crazy, the last six holes I thought I had a chance but somehow I battled it out and got the result,” said Dobbelaar, who plays out of Brookwater near Brisbane.

“It’s really cool to have them all here, there was so many of them, I didn’t realise I had that many family members.”

“This is definitely the biggest win of my career so far, but hopefully there can be a few more.”

In a week Dobbelaar won’t forget in a hurry, he was earlier locked in an epic tussle with highly-rated young New Zealander Luke Toomey in their semi-final before chipping in to win on the 21st hole.

Earlier he won his quarter-final on the 19th hole and his round of 32 match on the 20th which must have hardened his nerves for the amazing run of success that followed.