Well it’s another 12 months before we know whether Vegemite, meat pies, lamingtons and Fosters get to appear on the Augusta National ‘Champions’ dinner menu.

Australia’s top ranked players arrived at the Cathedral of the Pines clearly with a collective spring in their step given Adam Scott and Jason Day had finished joint second a year earlier. 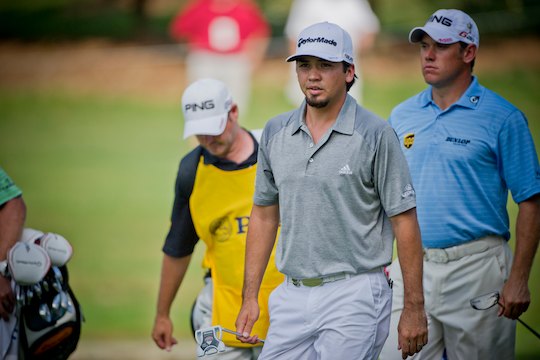 It had been Australia’s best result on the green carpeted Augusta fairways since Greg Norman went so agonisingly close in 1996.

Scott was among the first to visit the Masters Media Centre this year and again there was one question that had to be asked.

However it was not a question to be asked by the five Australian-born journalists accredited to cover this year’s US Masters who attended Scott’s press conference.

It’s not as they were shy. It’s just that too many times ‘that’ question had been asked and far too often Australian golfers went without being fitted with a green jacket.

Besides Scott had been asked the question ever since making his debut at Augusta National.

Though for a rich sporting nation like Australia it should not come to this.

Jack Newton had first gone close but then Greg Norman should have at least been fitted on at least two occasions with golf’s most sought after item of apparel.

You only have to look at Australia’s golfing record around the world.

In the past 20 years ‘down under’ golfers have come out on top to win 15 Major Championships, including nine British Opens, along with 76 PGA Tour titles. There’s been countless victories on the European Tour and a sprinkling of successes on the Asian Tour.

So Australian golfers know how to win.

Behind the Stars and Stripes, Australia used to be the second best pro golfing nation in the world.

But in recent years that title seems to have been passed to the UK, Ireland and South Africa.

However after Scott and Day finished joint runner-up in the 2010 Masters the question was again on the tip of many tongues but not the small contingent of Aussie golf journalists working this year’s Masters.

Scott was among the first to visit the Masters Media Centre on Tuesday ahead of the season’s first Major Championship.

Augusta’s affable green jacketed, Rob Johnson introduced Scott to the attending media: “Good afternoon, ladies and gentlemen. It is indeed always a great pleasure to welcome Adam Scott back to the interview room here at Augusta.

“In your 10th appearance at Augusta last year, you had your best finish ever, finishing second, and on the weekend you shot 67-67 on Saturday and Sunday, quiet an impressive performance.

“You went on to win the Bridgestone Invitational last summer and played in your fifth Presidents Cup.

Scott responded remarking he had visited Augusta some 10 days before the Masters so “I’ve had plenty of rounds already around here” and how he was “excited to be back, and I have been waiting 12 months for another opportunity of getting in there on Saturday.”

Scott was then asked eight questions from the floor in an 18 question conference.

But it was the ninth question from an American born scribe that again cut a raw nerve.

“Adam? Does the fact that you and Jason came so close last year add to any burden of becoming the first Australians to win her? And what would it mean to win it for the rest of the country? What would be the reaction?”

Scott’s response was just what you have expected from this quitely-spoken Queenslander.

“We have a lot of great players and we always have, and it’s just not happened. I think it’s just a coincidence that it has not happened. One year someone is going to get across the line.”

“To be the first would be incredible for an Australian, because not only would you be the Masters Champion, but in Australia, there would be that little asterisk next to your name.”

If so, you can be assured that Australians won’t be waiting for any ‘Champions Dinner’ invite to break out the Vegemite, meat pies, lamingtons and Fosters.