Jordan Zunic and Adam Bland share the lead at the Australian PGA Championship but Sergio Garcia set the early pace.

Garcia was pleased to fire a bogey free 5-under 67 despite feeling like his best golf had eluded him today.

“I played pretty solid. I wouldn’t say that it was amazing but it was good,” added Garcia.

“The most positive thing for me would be to go a bogey free round, which I didn’t realise until we got done.”

Teeing off at 6.10am was a first for Garcia and he was pleased to see plenty of fans there to greet him, Adam Scott and Wade Ormsby as they teed off the 10th.

“I think it was probably, I want to say it was the closest I’ve had a dinner and a breakfast ever. Yeah, I woke up at 4:00am this morning, had a bit of breakfast and then I got to the putting green probably just after 5:00am.

“I got to the 10th and I was impressed how many people were there at 6:10am in the morning. I was expecting people to kind of come throughout.” 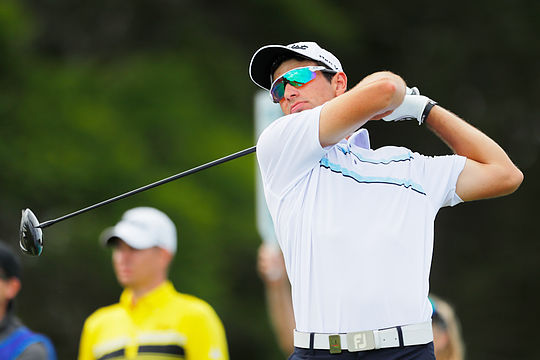 Playing in the afternoon, Zunic chipped in for eagle on the 9th, his final hole of the day to finish 6-under par and surprise himself with a share of the lead.

The 2015 New Zealand Open champion hasn’t enjoyed his best season so far but after reading fellow Professional Nick O’Hern’s book, ‘Tour Mentality’ at the suggestion of his girlfriend and caddy this week, Olivia Marlow, has put in a great showing to open the Australian PGA Championship.

“My girlfriend Olivia put me on to it. She said I should give it a read because mainly I’ve been struggling with more of my mindset, the mental aspect of the game,” said Zunic.

“It was a great read, Olivia sent Nick an email to saying how it’s really helped me a lot. He got back in touch with me, and then fortunately this week I managed to have a practice round with him on Tuesday.”

“Next thing you know, I’m having like an 18‑hole mentor playing lesson with Nick O’Hern. I mean, what can I say, what an awesome bloke. He just gave me such an insight on how to think better.”

Conversely, Bland dropped a shot on his final hole to finish 6-under par and in a tie for the lead with Zunic.

“I was just trying to make a few more birdies coming in; especially on the par-5s there I was going for it in two but it didn’t pan out,” said Bland.

“And obviously it would have been nice to not make a bogey on the last, but 6-under’s still 6-under.”

Now with a share of the lead, Bland puts himself in a good position for the tournament that could see him take out the ISPS HANDA PGA Tour of Australasia Order of Merit after a runner-up finish in the Oates Vic Open, third in the ISPS HANDA World Super 6 Perth and a top-5 finish in the Fiji International this year.

“That’s always the goal every year if I can get starts in Australia and play; I always want to try and finish high up on the Order of Merit or win one of these big tournaments if I can.

“I’ve been close in the past but not really, so it would be awesome to cap off one of these big ones, that’s for sure.”

But the story of the afternoon lies with three-time Australian PGA Champion Peter Senior who fired an impressive 5-under 67 to sit just one shot off the leaders.

“I didn’t want to play, but Gavin Kirkman from the PGA, he’s been on to me about playing. He said, ‘you would be a great asset even if you come out and play two days.’ I said, if I’m coming out, I’m not playing two,” said Senior who will turn 59 in 2018.

“The PGA’s always been good to me and I’ve had a great time out here. I only live 15 minutes down the road, it’s an easy walk for me and I play this course quite a bit so I feel like I’m at home.”

“I was on the 14th hole at Killara Golf Club in Sydney and we had 15 minutes before the entries closed and I rang Gavin and I said, ‘I’m hitting it all right, you may as well put an entry in for me,’ and here I am.”

Marc Leishman made a late charge to finish his round on 5-under, including an eagle on the par-5 15th.

“It was a really nice way to finish. The back nine I played a lot better, a couple birdies. That eagle was really nice. And then to follow it up with a birdie and birdie the last was really good,” said Leishman, who is now tied for third with Garcia, Daniel Nisbet (QLD) and Michael Wright (QLD).

“My game is in a good spot, putter feels good, so hopefully can get out early with no wind and have a low one.”