Aussie duo through to US Amateur quarter-finals

Brady Watt and Oliver Goss are through to the quarter finals at the US Amateur championship being played at The Country Club in Brookline, Massachusetts.

Watt, who was co-medallist along with England’s Neil Raymond in the stroke qualifying with rounds of 68 and 66, defeated Seth Reeves 3&2 in the round of 32 before claiming a strong 2&1 win over Canada’s Charlie Hughes in the round of 16. 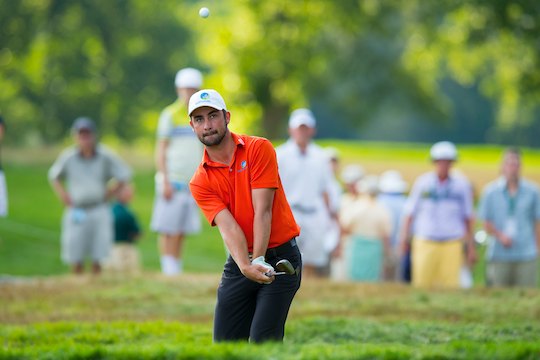 Brady Watt watches his pitch shot to the 14th hole during the third round of match play at the 2013 US Amateur (Credit: USGA/John Mummert)

Watt, who is ranked 9th in the world, will play Scottie Scheffler in the quarter-finals, a former US Junior Amateur champion and ranked 16th in the world.

“I have a lot of confidence off the tee. It gives me a lot of opportunity to get myself in the hole. [It] helps me get a lot of birdies.”

Goss, who is based in the US, defeated American Carr Vernon, 2-up, before accounting for Xander Schauffele 3&1 in their round of 16 match.

Ranked 13th in the world, Goss is set to play Brandon Matthews, who has an R&A ranking of 415th.

Nathan Holman defeated Canada’s Blair Hamilton in the round of 32 but was not able to account for Neil Raymond in the round of 16, with the Englishman winning their match 1-up.

The Australians are in the same half of the draw and wins on Friday could potentially end with an all-Australian semi-final.

This is a stellar result for both Goss and Watt as they have risen to the occasion and proved that they possess the skill and talent to serious challenge for this ‘major’ amateur title.

The last Australian to win the US Amateur was Nick Flanagan in 2003, when the Novocastrian claimed victory on the 37th hole over American Casey Wittenberg.