Australia’s Breanna Elliott played the most ‘consistent golf of her life’ over three days to win the Fuccillo Kia Championship at Capital Hills by carding a 2-under 69 on Sunday. She closed with a par on 18 to finish at 13-under 200 (65-66-69), one stroke in front of Augusta James (Bath, Ontario) and Fiona Puyo (Hendaye, France).

Elliott led wire-to-wire to earn her first victory as a professional. 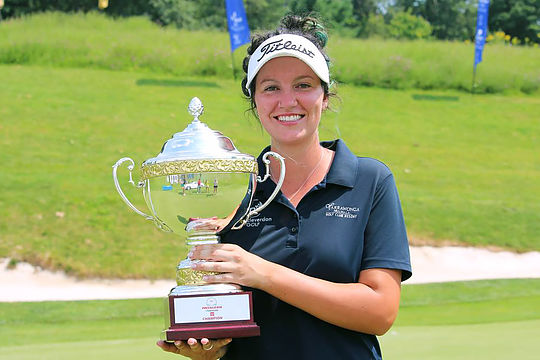 “This is so sweet, I am so pumped and this is just unbelievable,” said the free spirited Elliott, who has green hair. “I’m so happy right now, this is what I have been working for and this is huge for me. This is the first step in the right direction. This is for my family back home, I know they are going to be celebrating tonight.”

In addition to the first place check that moves her from 78th on the Volvik Race for the Card money list to 23rd, Elliott wins a 2015 Snow White Kia Optima LX courtesy of Fuccillo Kia of Schenectady. It is the first time in Tour history that the winner of an event also receives a car.

“My new Kia, this is amazing,” said Elliott. “I’ve been driving a rental all year and this car is definitely the cherry on top.”

All week, Elliott talked about how qualifying for the U.S. Women’s Open gave her a new outlook on life and golf. She also admitted that the pressure of the Open and the big crowds helped her sleep on the lead.

“Playing in the U.S. Women’s Open was the main reason I was able to stay calm today. I played in some really nice groups in practice and there were big crowds watching us,” said Elliott, who played with Michelle Wie, Stacy Lewis and Karrie Webb to name a few at Lancaster Country Club. “I’m really grateful that I had that experience and it paid off today.”

Before the U.S. Women’s Open, Elliott posted just two top 30 finishes this season. Last week, she finished in a tie for 24th at the Toyota Danielle Downey Classic.

Elliott dyed her hair green before the U.S. Women’s Open and said it seems to be a good omen.

“This green hair should be permanent, I feel like it is paying off big time for me,” said Elliott with a huge smile. “I had no idea when I did it that it was going to be a huge hit, but I love it and everyone will have to get used to me in green hair from now on.”

In all seriousness, the win was paramount for Elliott who is now in sight of the top 10.

“This is huge to move up the money list and really give me a chance (at an LPGA Tour card),” said Elliott. “This is what I need to kick start the last half of the year.