Australia’s Harrison Endycott has broken through with his maiden professional title on Sunday in winning the Huntsville Championship on the Korn Ferry Tour. 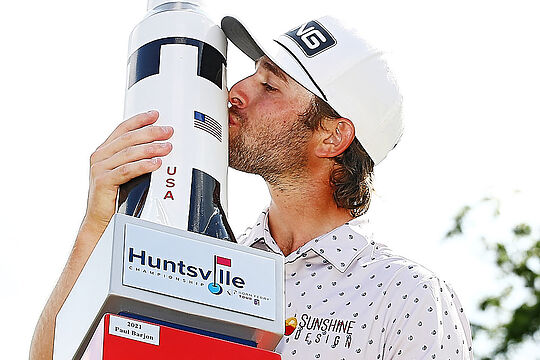 “It’s just a long journey to get here,” remarked Endycott who as an amateur won the 2016 Porter Cup in America before turning professional in 2017 after also winning the Lake Macquarie Amateur at home.

“I’m very blessed to be able to get it done this week. I’ve had a lot of disappointments in my life but this is not one of them. I’m kind of shellshocked a little. It is really an emotional win for me.”

Endycott certainly has done his share of hard yards during his formative years as a professional.

Endycott spent two seasons (2018 and 2019) on the PGA TOUR Latinoamérica, yet was not able to improve his status but a move to Scottsdale in Arizona made the difference.

He went on to earn Korn Ferry Tour membership via Final Stage of the 2019 Korn Ferry Tour Qualifying Tournament. As a rookie last season, Endycott posted three top-10s, including a season-high share of 4th at the 2021 Visit Knoxville Open, and six top-25s across 35 starts.

Then he had nine missed cuts and a withdrawal in his final 10 starts of the season, leaving him 81st on the 2020-21 Regular Season Points List, six spots outside the top-75 for fully exempt status in 2022.

The Sydneysider has since made the cut five times from his seven starts to date this season.

“There was a time I didn’t think I was going to win again,” remarked Endycott on Sunday. “I’ve been so frustrated at golf for a long time and it finally happened. I still have a long season ahead; I want to get some good work in throughout the rest of the year and try to achieve more; but right now I’m just so stoked.”

Sunday’s win catapulted him from 103rd to 12th on the 2022 Regular Season Points List. With 573 points, Endycott is primed for a legitimate run at his first PGA Tour card, but the regular season is only through 10 of 23 events and there is a lot of golf left to be played.

Curtis Luck was the next best Australian sharing 35th position with a closing 74 damaging his chances of a top-10 finish as he fell 25 places down the leaderboard.