Aussie golfers on top of the world

Victorian Marc Leishman and Queensland’s Brad Kennedy broke through for their maiden victories on the PGA and Japan Golf Tours this weekend.

In the Travelers Championship in the US, Leishman teed off more than 2 hours before the final group and posted a career best 8 under par 62 for a 14 under par clubhouse lead. 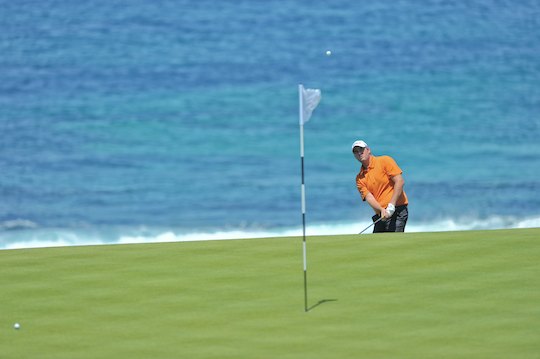 Leishman, who had enjoyed a relaxing Saturday evening dinner with Aaron Baddeley and cricket legend Ricky Ponting, then sat back and watched contender after contender capitulate over the closing holes to hand him his first victory on the PGA Tour in his 96th start.

Charley Hoffman looked almost certain to claim victory as he stood on the 17th tee, 2 shots ahead of Leishman, but proceeded to dunk his tee shot into water en route to a double bogey, bogey finish.

Roland Thatcher also drowned his tee shot on the 15th hole but made a clutch birdie on the 17th to give himself a chance of tying Leishman, only to dump his approach into a greenside bunker for a closing bogey.

Leishman’s 14 under par total was good enough in the end for a 1 shot victory over Hoffman and Masters champion Bubba Watson, who closed with successive rounds of 65 on the weekend.

With this win, Leishman earned US $1,080,000 and 500 FedEx Cup points, in addition to a 2 year exemption on the PGA Tour and a likely start in the British Open at Royal Lytham & St Annes next month.

Meanwhile, Sanctuary Cove’s Brad Kennedy cruised to a 3 shot victory in the ‘Gateway to the Open’ Mizuno Open on the Japan Golf Tour, shooting a final round six under 66 for a 17 under par total.

Leishman and Kennedy were almost joined in the winner’s circle by Victorian Marcus Fraser, who succumbed in a playoff to England’s Danny Willett on the fourth playoff hole in the BMW International in Germany on the European Tour.

Fraser and Leishman are both coached by Denis McDade in Melbourne and Leishman had watched Fraser battle it out on TV before beginning his final round.

On the Ladies European Tour, NSW’s Rachel Bailey shot a brilliant final round 66 to finish in a career high tie for 3rd behind winner Melissa Reid in the Raiffeisenbank Prague Golf Masters.

Stacey Keating and Nicole Garrett were other Australians in the top ten in the Czech Republic.